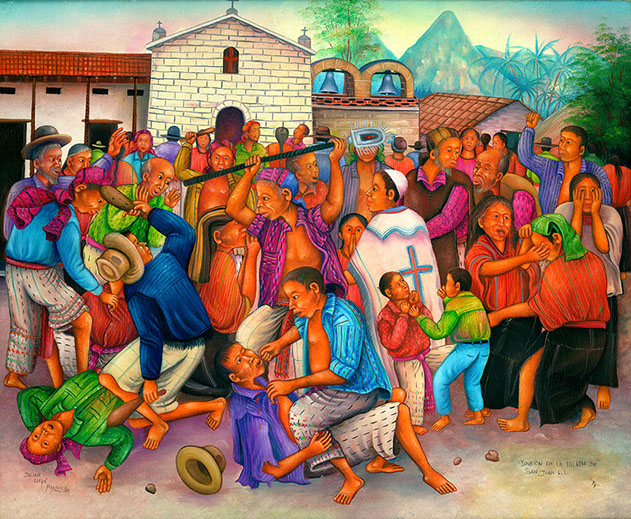 In the Mayan communities, mainly the small and isolated ones, they have their own resident priest. San Pedro la Laguna did have a resident priest, he also often officiated in San Juan la Laguna, a smaller town that is a twenty-minute walk away from San Pedro.

John Vesey, an Irish-American priest from Brooklyn, New York, arrived in San Pedro la Laguna after having served in Santiago Atitlán where his confrontational style had not been welcome. He was almost alone in believing that the Maya parishioners of Santiago Atitlán, because they were at times sympathetic to the guerrillas, were responsible for the 1981 assassination of Father Stanley Rother, the previous priest who was much loved there. Vesey disliked the cofradías (guilds) which he felt were pagan, but he was also at odds with Catholic Action, a group of lay Catholics who were attempting to influence Maya society. Vesey’s basic temperament seemed unsuitable for dealing with indigenous peoples.1

Vesey was a better fit as acting priest in San Pedro, because the cofradías had been voted out in the 1970s. However, the people of San Juan, however, did not want to give up their cofradías nor their cult of Maximón. Vesey felt both practices were pagan. Vesey’s approach was to confront differences rather than to be conciliatory. Victor Perrera, a Guatemalan born, U.S. writer and journalist, relates that: “Pedro Cholotio Iquic, an earnest, articulate catechist who heads San Juan’s Acción Católica delegation, was most incensed at Father Vesey’s demeaning attitude toward catechists and cofrades. He had refused to perform the Eucharist for them, claiming they were unworthy and calling them ‘imbeciles,’ ‘stupid little Indians,’ and ‘puppets’.”2 Vesey ended up closing the church at San Juan. In 1987, the tensions between Vesey, the cofradías, and Catholic Action, erupted into the violence depicted in Julian’s painting. Perrera states: “El Grafico’s editorial of November 9 attributed the scandal to a clash between cultures, depicting it as a foreign priest failing to understand the “magic-religious” traditions of the indigenous communities.”3 Vesey was eventually moved to another part of Guatemala.4 Since then the church building in San Juan has been rebuilt with a much larger sanctuary, retaining only the old façade, the one pictured in Julian Coche’s painting.

División en la Iglesia is Julian Coche’s most significant painting before he entered art school in Guatemala City. For a teenager who seldom said more than a few words, it is an impressive theme. Julian had witnessed this confrontation with Father Vesey who is pictured in white. During San Juan’s annual fair, Julian exhibited this painting with others by San Juan artists, but it caused a controversy and Julian was forced to take it down.