About this painting by 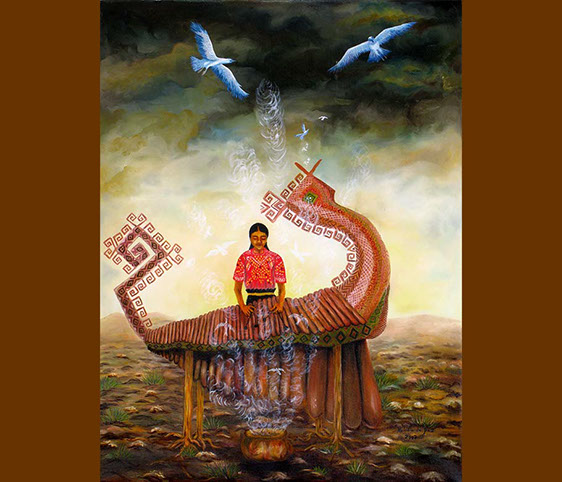 Paula’s paintings are like dreams. Everything in the painting is symbolic. Paula’s symbols come from Maya culture and traditions, from her experience being marginalized both as a woman and as a Maya, and from her hopes for the future. In this painting Paul Nicho deftly intertwines the themes of music, weaving, nature, tradition, and peace.

Marimba music is quintessentially Guatemalan. Paula strikingly depicts the marimba as a bird. The musicality of one suggests the other. The marimba is an old style marimba where the sound chambers below the keyboard are made of tecomates (goards) rather than being constructed by a carpenter from wood like a modern marimba. The legs of the marimba are shaped like trunks of trees. The roots are visible growing deep into the soil alluding to music being rooted in the earth and in Maya tradition.

The woman in the painting wears the traje of Nahualá, a Kaqchikel Maya town in the department of Sololá. Many huipiles and tzutes of Nahualá feature stylized images of birds and animals. Paula Nicho, who is also an accomplished weaver, has given the marimba the form of a stylized bird similar to those in weavings from Nahualá. The squared spiral designs emanating from the tail of the bird (both in the painting and in Nahualá weavings) are similar to designs that appear on ancient Maya temples and pottery.

In the sky above the marimba fly two blue and white birds that symbolize peace. On the ground in front of the marimba, the smoke of incense can be seen rising from a bowl. In the smoke appear ghostly images of birds rising up to the sky, seemingly becoming real birds on the way. From the mouth of the marimba-bird the word paz (peace) floats into the sky. Just above the words are two small birds. Are they at a distance or have the words of peace been transformed into birds?