Life in a Guatemalan
Indian Village

As it was observed by the author in the year 1941.

At the southern edge of the broad highland belt that runs through Guatemala, captured in a mountain basin commanded by three towering volcanoes, lies Lake Atitlán. A score of Indian settlements, dwarfed by the mountain backdrop, lie scattered around the twisting shores of the 1ake which measures twelve miles long and half as wide. 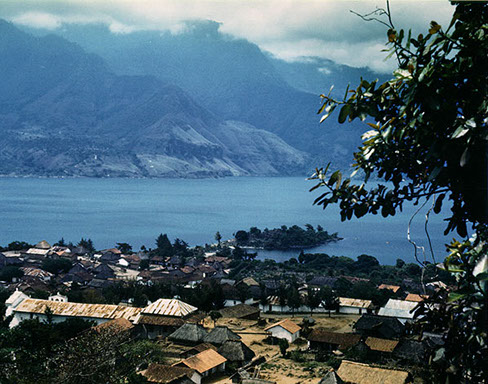 Like the million and a half Indians that make up half of Guatemala's present population, the residents of the Lake Atitlán basin speak dialects of the Maya-Quiche linguistic stock, akin to the language once spoken by the builders of the fabled Maya Empire of lowland Guatemala and Yucatan. The women weave on backstrap looms, the men cultivate corn on mountain slopes and valley plots, and the people of different villages exchange goods in open markets. This is part of the pattern that existed before Columbus. But equally marked is the impact of the Spanish conquerors upon their culture. Each village has its courthouse and Catholic church; coffee has become the indispensable beverage; and cash is the medium of exchange.

In many ways alike, the villages surrounding the lake differ from one another in size, specialized crops, and level of wealth. Each has its characteristic costume, its peculiar dialect, and its distinctive customs, despite centuries of cross contact. Each community has repatterned its twin heritage of original Indian and introduced Spanish traditions into a way of life as distinctive from the others as are the personalities of different individuals. Every village may be said to have its own culture. Reliant on spoken rather than written tradition, yet increasingly subject to city ways, these peasant communities combine primitive and civilized features. They may best be described as examples of folk culture.

The following pages present a sketch of the folk culture of San Pedro la Laguna, a cluster of some five hundred adobe houses compactly grouped in blocks around a central square. With a population of 2400, the village is third largest of the lake settlements and occupies a terrace more than a hundred feet above the water at the base of an inactive volcano whose steep sides form part of the agricultural hinterland. Situated about 5,000 feet above sea level, the village enjoys a temperate climate, the annual cycle consisting of a wet and dry season of about equal duration. The title of the village incorporates the name of its patron saint (St. Peter) and indicates its lake location (la Laguna) to distinguish it from other Guatemalan settlements named in honor of the same saint. But for present purposes the name San Pedro will suffice, the term Pedranos referring to the inhabitants.

No roads connect San Pedro with other villages. The people travel on foot and occasionally on horseback along narrow paths winding around precipitous hillsides. They own no vehicles other than native canoes made of hollow logs bulwarked by side boards. These are navigated by a complement of men paddling from erect position, an expert at the stern steering the vessel while the man in the prow breaks the force of the white-capped waves whipped up by sudden winds funneling through mountain gaps. Some privately-owned canoes are small enough to be handled by a lone occupant; others are communal property and can carry forty passengers with hundreds of pounds of cargo. One or two large canoes manned by municipal crews make daily trips to the market village of Santiago Atitlán.

There are no electrical, mechanical, or other facilities with the exception of telephone and telegraph installations in the courthouse for transmission of administrative messages. Most houses consist of a single room, a door, and no windows. Walls are made of adobe bricks, although some of the more conservative families use cane stalks, and a few wealthy citizens build their houses with trimmed stone blocks. Pitched roofs are made either of thatch or overlapping tile or, in a few cases, of corrugated sheet metal. Nearly all floors are of hard-packed dirt.

A few families raise pigs which are penned or tethered in the yard, many own horses and mules for transport, and nearly all have chickens and turkeys. Several well-to-do families raise cattle on coastal lands, although an occasional steer is fattened for market on the outskirts of the village and one or two cows are milked for the benefit of non-Indian (ladino) residents temporarily stationed in San Pedro. Dogs serve as pets, and cats are sometimes kept to rid corn bins of mice and rats.

The hearth consists of three stones placed in a corner of the house. In the absence of chimneys the smoke escapes through the rafters. A minority of dwellings have adjoining kitchens for cooking and eating. People sleep on mats placed on the floor or, more usually, on elevated plank beds. Other standard items include a large vessel for storing water, a considerable variety of clay pots and griddles for cooking and storing food, wooden chests for clothes, and three-legged grinding stones for milling corn, coffee, and chili peppers. Tables and chairs are not generally used; men sit on stools, women and children on the floor. Wealthy families own cupboards and other sophisticated items of furniture. 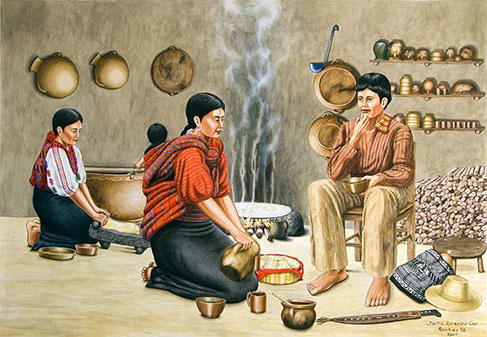 Customarily there are three meals a day, the men taking lunch and gourds of water to the fields. A large variety of foods—including wild greens and fruits in season—are eaten. Cooked beans are a staple, a shiny black variety being a particular favorite. Beef, pork, fowl, and eggs are relished but are consumed sparingly because of the cost. Squashes are a common item, and tomatoes and green onions are the main vegetables used in cooking meat soups.

But the most important foodstuff by far is corn; it comprises over three quarters of the total diet. Stacks of toasted corn cakes, or tortillas, are eaten at every meal. Corn is also consumed in the form of cooked tamales wrapped in corn husks, in the form of a thick gruel, in the ear, and in various other ways. No use is made of rice or potatoes, though local bakers purchase wheat flour to bake white breads and rolls which are eaten on festive occasions. With one or two exceptions the natives neither use nor care for milk and dairy products.

In common with other members of the Mongoloid racial stock, the people of San Pedro have straight black hair, dark eyes, well-developed cheekbones in a rounded face, and a bronze cast to the complexion. But they differ somewhat from Indians of the surrounding region. They are taller, have lighter skins, and in general are more appealing as a physical type to outside observers, possibly owing to an admixture of white blood in earlier times. Many of the men and women and most of the children strike visitors as being decidedly handsome, and they have a widespread reputation for dignified amiability and a high sense of honor. In the village population there is, of course, a great range of individual variation.

Men wear gaily striped shirts tucked into white cotton trousers embroidered with colored figures and held at the waist by a red and black checkered sash. A red kerchief is sometimes worn about the neck. All these items are tailored from cloth woven in the village of yarn purchased from the outside. Men either go barefoot or wear sandals bought from visiting merchants. They buy straw hats to protect them from the sun, and dark blue woolen sack coats to wear over the shirt on holidays. Those who can afford it purchase costly felt hats to replace inexpensive straw hats on festive occasions.

Women weave most of the men's clothes but buy most of their own, including ankle length wrap-around skirts in distinctive blue, green and occasionally red patterns. Women often make blouses of American dry-goods, although some women still weave homespun material for a white tunic-like blouse (huipil), slipped on over the head with sides partially stitched and openings left for the arms. A few women even spin their own cotton yarn from the fibers of bush-cotton plants. Broad belts in bright designs for securing the skirt and richly-colored shawls for wear whenever women leave the house complete the costume. Women are invariably barefoot and neither sex makes use of undergarments. From infancy, children's dress parallels that of their fathers and mothers.

With this introduction, attention may now be directed to the San Pedro way of life as experienced by the native from infancy to death. The concluding portion deals with the general characteristics of San Pedro culture.