Life in a Guatemalan
Indian Village

As it was observed by the author in the year 1941.

The culture of San Pedro, in common with other cultures, provides standardized solutions to certain problems basic to all social existence. To be self-perpetuating, all societies must successfully meet such problems as providing food and other biological needs of their members, conditioning new recruits to carry on the culture of the parent generation, regulating individual behavior in the interest of group cohesion (social organization), supplying goals and motivations to induce effort (incentive system), and allaying concern over uncertainty (security system).

These aspects of culture are separated only in the mind of the analytical observer. The native does not differentiate his activities. Nor can elements of culture be neatly assigned under one or another of the above headings. Any institution or item of conventional behavior can simultaneously answer a multiplicity of needs. Thus a festive house-building party combines features belonging to economic organization, social organization, and the incentive system. The individuality of San Pedro culture arises from the particular ways of meeting the universal requirements of group living and from the manner of integrating the respective need-systems into a unified cultural pattern. 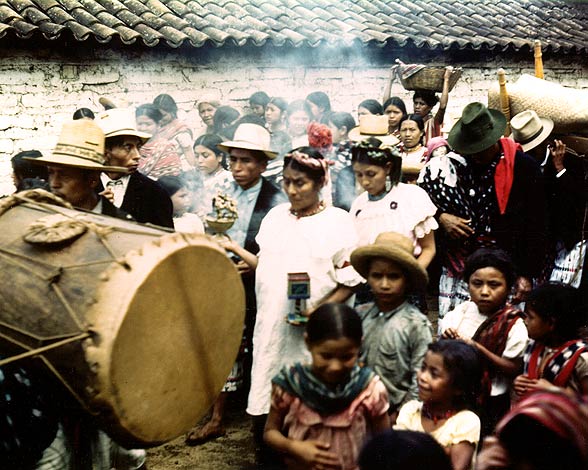 Social organization in San Pedro comprehends the division of responsibilities between the sexes, the pattern of authority within the family, and the graded servicio system for administering political, judicial, and ceremonial affairs and for allocating prestige to the participants. Underlying all forms and phases of social organization is the fundamental hierarchical principle which defines each individual's place in the dominance-submission structure and regulates his upward movement within this structure.

The hierarchical principle, reflected in the conception of male dominance and the superiority of the older over the younger, is apparent in formal eating arrangements and marching order. Whenever a mixed group walks together along a path, all the males, regardless of age, precede the female contingent and within each sex the oldest leads, and the youngest trails. A younger person who overtakes an older not only exhibits disrespect but exposes himself to magical punishment. In walking immediately ahead of an older person, he runs the risk of contracting some of the latter's age and of growing prematurely old.

Within the family, boys command younger brothers and obey older brothers. Consistent with this convention, the system of kinship terminology provides a man with no single term for "brother," but rather a set of terms, one meaning "older brother," the other "younger brother." Women similarly distinguish between older and younger sisters. But age distinctions do not cross sex lines; a girl calls a brother of any age by the same term, and a boy uses a single tem1 to designate a sister of any age. This again is consistent with the conception of male dominance regardless of relative age as between brother and sister.

When two people meet, the younger invariably voices the first greeting; the older acknowledges the salutation. Their greeting terms affirm, respectively, deference and superiority. Each office in the servicio system is clearly ranked with regard to all others, and men who occupy the same office are distinguished by numerical order. Thus, each deputy constable knows whether he is first, second or twelfth deputy, and each mayordomo or junior assistant in a cofradía knows whether he is first, second, or fifth mayordomo. The cofradías themselves, and their respective saints, are likewise graded from first to sixth, corresponding not only to their degree of importance but to their place in religious processions.

So firmly is the hierarchical principle rooted in the minds of the natives that no explanation of the writer's purpose in studying their community, however forthright or ingenious, carried full conviction until he hit upon the simple expedient of adding, "I'm here because my boss sent me here." Obedience to properly constituted authority is the most persuasive of all reasons. 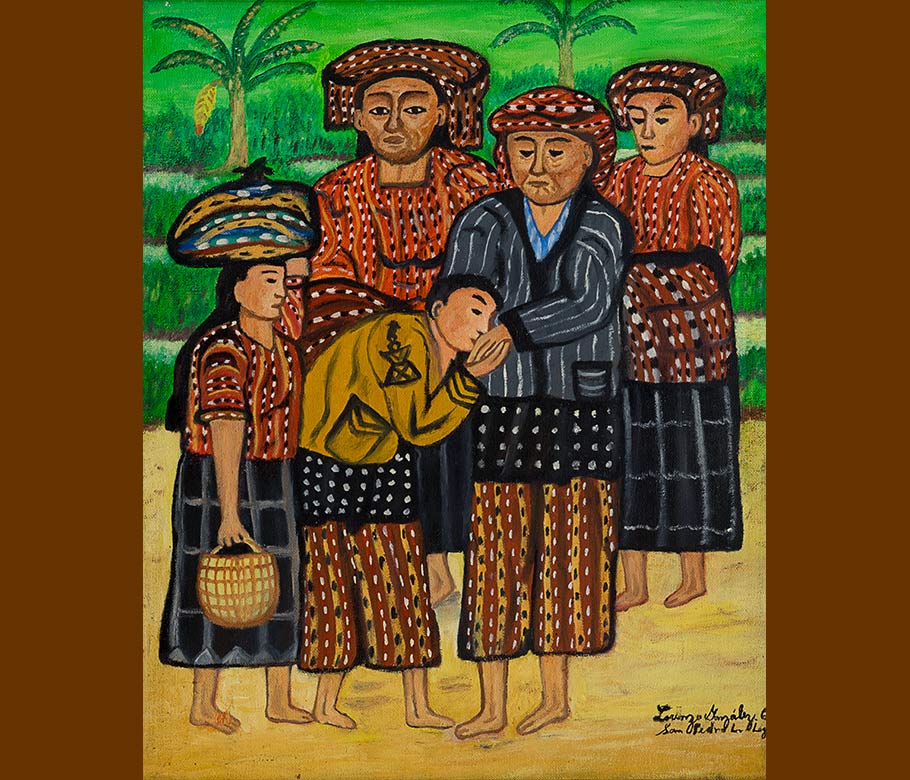 The incentive system in San Pedro hinges on two central values or ideals: individual success and community service. The goal of personal success demands unremitting effort to acquire good clothes, well-built houses, horses and steers, and most important, agricultural lands. The struggle for wealth is rationalized in terms of providing children with a respectable estate.

At the same time, men are expected to subordinate personal interest to community welfare. According to this ideal, one should live a blameless life, show proper respect for tradition and authority, and honorably discharge his successive servicio obligations. Motivation to achieve these ends consists of the desire to avoid the sting of ridicule or the penalty of lawsuit, to forestall bad luck by obeying the mandates of the moral and mystical powers. On the positive side, society holds out the reward of exalted status for those who graduate from community service to become village elders.

The ideal of self-advancement ties in with the ideal of community service. One needs to accumulate a surplus of material goods to be able to hold the top offices in the cofradía system. Even some of the higher offices in the administrative organization involve food distribution and other personal expenditures. Moreover, devotion to the village cause puts one in the good graces of the fates and enhance one's luck in private enterprise.

But, just as often, the two values work at cross purposes. Men are sometimes reluctant to dissipate part of their hard-earned fortune in connection with servicio assignments. Not infrequently families are forced to sell valuable land to meet cofradía expenses. When one man of middle age renounced Catholicism to join the small body of Protestant converts, his neighbors accused him of doing so in order to escape an imminent cofradía appointment requiring heavy expenditures. Protestant converts in San Pedro avoid contact with the images of the saints which are considered idolatrous. They also foreswear alcohol, cigarettes, and marimba music.

The struggle between self-aggrandizement and self-sacrifice affects every individual. How the two-way tension is resolved depends upon particular circumstances and particular individuals. The two ideals act like a pair of counterweights which prevent an individual from bending too far either in the direction of extreme self-seeking and consequent detriment to the community or to extreme self-sacrifice and consequent deprivation of self.

Many conventional modes of behavior reflect a delicate balance between the tug of competition and the pull of co-operation. This is exemplified in the attitude toward servicio nomination. Refusal would betray a shameful lack of civic concern. Eager acceptance would betray a lack of personal ambition since only a slothful person would welcome escape from the role of family provider. The only compromise is to accept under pressure. A citizen preserves both ideals by saying, "I do not want to (self-interest) but I have to (community obligation)."

In defense against uncertainty, the psychological security system of San Pedro culture takes for granted three levels of causation. On the most immediate level, the fortunes of men are controlled by their own efforts: men have what they work hard to get; and men suffer who shirk their duty.

But all mortal striving is unavailing without the co-operation of the immortal powers. To enlist their aid human beings must earn their good will by following tradition, by obeying authority, and by paying proper respect to the various saints and the occult forces of nature. Men can gain the intercession of the appropriate powers through prayer and expiation, a shaman mediating between client and divinity; vengeful individuals can bring injury to others by supplicating the powers of evil. And so, on a second level, the fortunes of men are controlled by forces unseen but yet within reach of human manipulation. Men need not despair if hard work goes unrewarded or misfortune strikes the innocent—they can approach the right powers to alter their fate.

But such is the lot of man that in spite of prayer and repentance, his crops may fail and his children die. To spare such men from the smart of failure and the stigma of incompetence, there is yet a third and final level of causation which lifts the blame from their shoulders. By this ultimate explanation, the fortunes of men are fixed by destiny from the time of birth.

Shamans know the sacred calendar of the ancient Mayas. In essence this consists of recurring cycles of twenty day-names, each man inheriting the peculiar destiny controlled by his day of birth. The outlines of a man's destiny emerge in the course of events. Time reveals whether he is born to fail or prosper, to survive or die, to be bold or timid. Most men are content to glean their fate from the record of their experience. One man lost money trying to raise horses; one after another died. He concluded that he was not destined to raise horses and turned to other enterprises. Another man met an emergency by extracting a neighbor's abscessed tooth with pliers. Others heard of his success and came to ask similar favors. Now everybody knows he is "lucky" at dentistry.

But some, oppressed by adversity, consult a shaman to learn their fate and to receive guidance. Depending on his occult findings—and his good judgment of human character—the shaman advises a client to change his course of action, to take a certain remedy, to supplicate a particular power, to expiate a sin, or to resign himself to the peculiar destiny ordained by his day of birth.

The three dimensions of causation that make up this security system in San Pedro provide a kind of consolation to every human being. The man who is rewarded by his work feels repaid for his industry. The man who meets temporary reverses takes comfort in the hope that higher powers will come to his assistance if he makes the right appeal or shows proper humility. The man who is overpowered by misfortune finds solace in subscribing to the will of destiny. The native sees no inconsistency in falling back on three orders of explanation according to convenience. He wastes no time idly formulating the rules of the universe. But in the, back of his mind all three levels of events are but different aspects of a single cosmic design seen in different perspective, the several aspects in turn calling for effort, humility, and resignation. In the last analysis these are three of the elements which enter into the outlook of man the world over.