[This article was first published in Harvest of Violence: The Maya Indians and the Guatemalan Crisis; edited by Robert M. Carmack; University of Oklahoma Press: Norman and London, 1988. It is reprinted here with the kind permission of the authors. It is illustrated with paintings by Mayan artists of San Pedro la Laguna and San Juan la Laguna.] 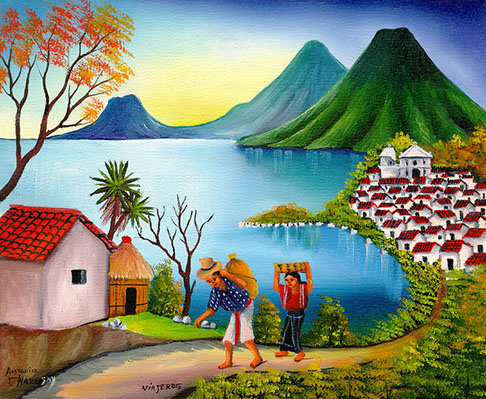 In 1941, when one of us (Paul) first worked in peaceful San Pedro la Laguna, there was no sign that the Maya Indians of highland Guatemala were destined to be caught in the toils of a brutal civil war and that the trouble would eventually reach the shores of Lake Atitlán, claiming the lives of informants who had become good friends in the course of a dozen return visits during the ensuing years. San Pedro, an all-Indian town, has proved to be an instructive example of the process of rapid social transformation at the community level. The shift from a predominantly subsistence economy to a mainly market economy has been accompanied by remarkable changes in San Pedro's technology, political system, and religious organization. Gone are the six cofradías (religious brotherhoods) and their colorful processions on saints' days. Gone, too, is the monopoly enjoyed by traditional Catholicism; a vigorous Protestant movement has generated fourteen separate fundamentalist churches, embracing nearly 40 percent of the town's six thousand inhabitants.

By the time of our visit to San Pedro in 1979, the massacre of the Kekchí Indians at Panzós had already been condemned in the world press. But Panzós seemed remote from the tranquil Lake Atitlán area, and guerrilla action far to the north and west was scarcely in the news. The purpose of our 1979 trip was to gather information on social change at San Pedro. San Pedro had contributed more migrants to the city than other Indian municipios in the area, and we knew that one reason for this was prior experience in Guatemala City of Pedranos who had been volunteering for two-year hitches in the army ever since the late 1930s when Gen. Jorge Ubico Castañeda was president. In 1979 we wanted to find out how many of the current residents had a history of army service. Adolfo (all names of living Pedranos mentioned here are pseudonyms), a man known to us from prior visits, told us that he was a close friend of another Pedrano, Jacinto, who could supply an estimate because, as comisionado militar (military commissioner), he was in charge of recruiting soldiers from the village. It was troubling to learn that some young men in San Pedro tried to hide from Jacinto for fear of being captured and forced to enter army service. Military training, once an attractive opportunity for Pedranos, was now considered a harsh experience to be avoided if at all possible.

Our final interview on that 1979 trip was memorable. We conversed with an old friend named Francisco. The father of six children, he was a successful baker, a Protestant pastor, an astute man with an engaging personality. Having heard something about anthropology, he asked whether we really believed that man descended from monkeys. Although we did not quite convince him that evolution and the Bible could be reconciled, we left with a resolve to seek him out on our next trip to San Pedro for an account of his involvement in the cause of evangelical Protestantism. But there would be no next time for Francisco. Jacinto, his friend Adolfo, and the baker Francisco—each would play a role in the deadly drama that began to unfold the year after we left San Pedro in 1979.

In July 1980, a middle-aged woman named Marta wrote author Paul to acknowledge receipt of a check, adding that the price of corn had risen sharply, that her most able-bodied son was out of work, that a local electrical employee had been accidentally electrocuted (carbonizado), and that another man had been found dead in a bar, the victim of alcohol. In San Pedro only bad news qualifies as reportable news. Marta concluded her letter by writing, "And recently a group of guerrillas arrived and we were very fearful, but they didn't do anything (to us)." Author Paul has known Marta since 1941, when, at age fifteen, she served as house helper, errand girl, and occasional interpreter (in those days very few women spoke Spanish). She is now a poor widow with eight children. The oldest is Adolfo, friend of Jacinto, the military commissioner.

Late in 1980, Marta again had occasion to acknowledge receipt of money. This time her letter sounded a note of alarm: things were critical in San Pedro. The baker Francisco had been abducted in the middle of the night, and a few weeks later they had carried off another man. Now people were afraid to walk the streets after dark. This was no time, she warned, to visit San Pedro; it was too dangerous.

Far from the scene of action, we could only speculate about the identity of the abductors. Were they guerrillas? Were they army soldiers? Would we indeed be in danger if we went to San Pedro? In an atmosphere of heightened tension, would informants assent to interviews? Would their association with us put them under suspicion?

Eventually we learned that the abductions, which continued during a two-year reign of terror, came to a halt in October 1982. Calm had been restored by the time we paid our next visit to San Pedro in April 1983. We found Pedranos to be as informative as ever. Relatives of the victims and many others supplied a host of details that enabled us to reconstruct the course of recent events.

Four events had followed each other in rapid order during 1980, when General Lucas García was in power. On May 20, an Organización del Pueblo en Armas (ORPA) guerrilla group had addressed the villagers in the central plaza and denounced the injustices of Guatemala's oppressive regime. Some of the younger and better-educated Pedranos cheered the group. Within hours the guerrillas vanished, and to this date none have reappeared in San Pedro. Another event was the establishment of an army post near neighboring Santiago Atitlán. Before that there had been no military encampment anywhere on Lake Atitlán.

Still another event was the expansion of Jacinto's role. He had been empowered by the army to appoint a large number of assistants so that there was now a corpus of military commissioners made up mainly of Pedranos with a history of military service. They were to guard against subversion and had been given arms to protect the town from guerrilla activity. Jacinto was chief military commissioner, with Marta's son Adolfo second-in-command. The fourth event of 1980 shook the town: the abduction of Francisco the baker, the first of about twenty-five abductions and killings.