We must finally ask to what extent the trouble in San Pedro can be ascribed to social cleavages within the community. The answer varies with the category of offenders being considered. Jacinto, Adolfo, and the rest of the venal former commissioners were mainly driven by greed and the desire to settle personal scores. There is no need to seek explanations in lines of cleavage dividing San Pedro society. They were waging no interfaith warfare. Their group and the people they victimized included Catholics and Protestants in about the same proportion. Their chief, Jacinto, was nominally Catholic; his close friend and second-in-command was Protestant. The former commissioners were not members of one political faction in battle against another; they were not politically active as individuals.

The secret agents, in contrast to the former commissioners, were politically ambitious. Now in his sixties, Mario, the most thoroughly political of the several secret agents, has a history of continuous, often acrimonious involvement in town politics dating back to the time local political partics first sprang up under the democratic Arévalo-Arbenz regime of 1945-54. Since 1968, Mario has been the leader of the local branch of the ultrarightist National Liberation Movement (MLN), which has been termed "the party of organized violence." This is the party of Sandoval Alarcón, generally reputed to be the founder of Guatemala's Mano Blanca, the notorious paramilitary "death squad" organization. MLN leaders have counted on Mario to deliver votes during national and local elections. Mario in turn has counted on his friendship with Sandoval to receive expert legal assistance to help him in his role as güizache, win court cases in Sololá for his Pedrano clients—disputes over land titles and inheritances are common—and defend Mario himself whenever political opponents charge him with corrupt practices.

Over the course of years, political parties and coalitions have waxed, waned, and vied for power in San Pedro. By the mid-1970s, the political groups had sorted themselves into two opposing coalitions led by contending champions. The rival leaders were Mario on one side and civic-minded Antonio on the other. In 1974, Mario's slate lost, and Antonio served as mayor for a two-year term. In 1976, Mario's slate won, remaining in office four years. In 1980 a prosperous merchant ran for mayor. He had been a political ally of Antonio and, like him, known for his upright character and respect for the law. To run against the merchant, Mario's MLN party fielded a slate of candidates that included the unscrupulous boat owner and Salvador, the would-be chief of the military commissioners—men who, like Jorge and like Mario himself, were later revealed as secret agents for army intelligence. Mario's men, who labeled their platform "The Best Anti-Communist Program" (this was under the García Lucas regime), were defeated at the polls by the prosperous merchant, who began what was to be a four-year term but who was removed in June 1982 (no commissioner had yet been arrested) when Jorge was imposed as mayor.

If Mario and his association failed to win power overtly in 1980, they nevertheless were able to carry out at least part of their anti-Communist agenda by virtue of their covert army connections. Informants claim that by the time Mario was arrested, however, he had ceased being a protégé of Sandoval Alarcon because he had not been able to swing enough votes for the MLN.

It is interesting, if not surprising, to note that the alignment of political leadership prevailing before the onset of violence in San Pedro prefigured the antagonism between the exposed secret agents—the leaders in the group of fifteen suspects arrested after Lencho was kidnapped—and those who led the fight to have them arrested and punished: civic-minded Antonio, the prosperous merchant, the more respected of the town's two güizaches, and Fernando, one-time political ally of Ríos Montt.

It may be tempting to blame the outbreak of violence in San Pedro on social divisiveness and the settling of old scores, but the temptation should be resisted. Religious competition and vigorous political infighting were features of San Pedro life for decades before 1980 without producing violence. The same can be said for interpersonal antagonisms. They arose in the past and were settled by means short of murder. What disrupted the peace in San Pedro was not the presence of differences and divisions but the army's recruitment of agents and spies that had the effect of exploiting these cleavages. 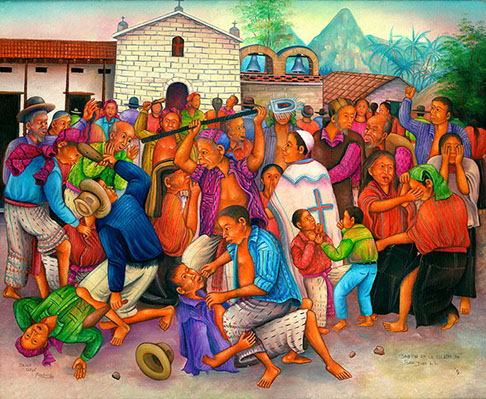 "División en la Iglesia de San Juan la Laguna," division in the church of San Juan la Laguna. Catholic priest John Vesey, who for a time was head of the parishes of San Pedro and San Juan, caused more divisiveness in the church than other priests before and after ­‰him. He tried to close down the church in San Juan until the cofradias were abolished. This painting which represented a confrontation that came to blows, was censored and not allowed to be exhibited in the week long fair of San Juan. Painting by Julian Coche Mendoza, 1994

Competition between parties is, after all, one of the hallmarks of political democracy. Another hallmark is an informed electorate. By this token San Pedro has become increasingly democratic. Compared to the time during the Arévalo-Arbenz era (1945-54) when elections for local office were introduced, Pedranos are now more literate and informed about history and the world around them. The local school system has been extended, and a good number of Pedranos have gone on to acquire professional training in such fields as accounting, agronomy, and especially education. Two or three are physicians. Still another hallmark of democracy is freedom of expression. With experience and education, many Pedranos have learned to express their differing opinions about justice, religion, and government.

Ever since the Arévalo-Arbenz era, San Pedro society has been moving in the direction of greater democracy, while the Guatemalan government has been moving in the opposite direction. Increasing divergence between the two tendencies, the local and the national, can be seen as a source of the affliction that befell San Pedro. Francisco the baker spoke his mind about the abusive police and the militarization of the lake area and was the first Pedrano to be "disappeared" by "unknown parties" (desconocidos)—two terms that have become common parlance in Guatemala, along with "criminal subversives" (subversivos delinquentes). Lencho, the fearless chief commissioner, spoke up in defense of civil liberties and fell victim to the violation of human rights. It can be said that San Pedro has suffered punishment not for the sin of displaying divisiveness but for the virtue of practicing democracy.