Late in the day when the sun was receding over the mountains to the west,  I encountered Domingo Jonatan Perez, a San Pedro artist, swimming near the dock in San Juan la Laguna. Drying himself off, he insisted on taking me to the house of a young Juanero man who he had taken on as a student. Victor had just started with Jonatan and had not yet progressed to actual painting, but he showed me his pencil drawings. There were several he had done before Jonatan had started working with him, and several after. In the ones done before, Victor Vasquez had filled every inch of the paper with plants and people. They had a crazy energy I can only liken to the Fifties college phenomenon of seeing how many people you could squeeze into a telephone booth. In trying to teach Victor, Jonatan had somehow managed to drain all the energy out of Victor’s drawings, so that the ones he worked on with Victor were lifeless in contrast to the ones Victor had done on his own. I got very excited about the three drawings that Victor had done on his own, so much so that, although I offered to pay for them, Victor insisted that I take them as a gift. I did. I took them straight to my friend Vicente Cumes, the one person whom I knew would see the possibilities that I did in Victor’s work. 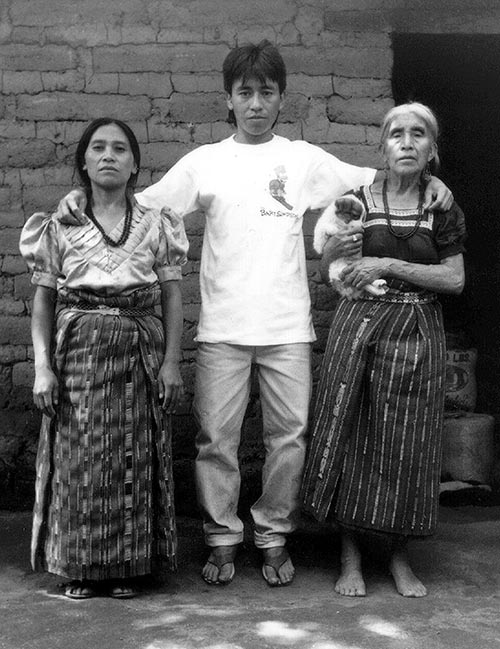 Victor Vasquez Temó with his sister and mother. Victor's father died shortly after he was forcibly inducted into the Guatemalan army, but because that meant he was now the head of the family and resposible for their well being, he was discharged. They are among the poorest residents of San Juan la Laguna.

The next day Vicente and I walked to San Juan to talk to Victor. We convinced him to give up the idea of looking for a teacher and instead to paint on his own. To get him started off, we provided him with a small canvas, some brushes and some paint, and he agreed to finish an oil painting for me before I returned to the States. This first painting, one I still have, was quite naive, but remarkable for his observation of how children behave in a marketplace. When I asked Victor what he found difficult about doing this painting, he replied that, as a campesino used to working in the fields, he found it difficult to sit in the same place for so many hours at a time. There was another curious thing about the painting. While the rest of the painting was dry, the dark background was not dry, nor was it dry when I had to leave Guatemala. I carefully packed it so as not to ruin the painting. When I got home it stayed sticky-to-the-touch for at least another month. When, much later, I commented on this to Victor, he said that being a beginning painter he had not known that artists used linseed oil with the pigment. He had used his mother’s cooking oil instead. 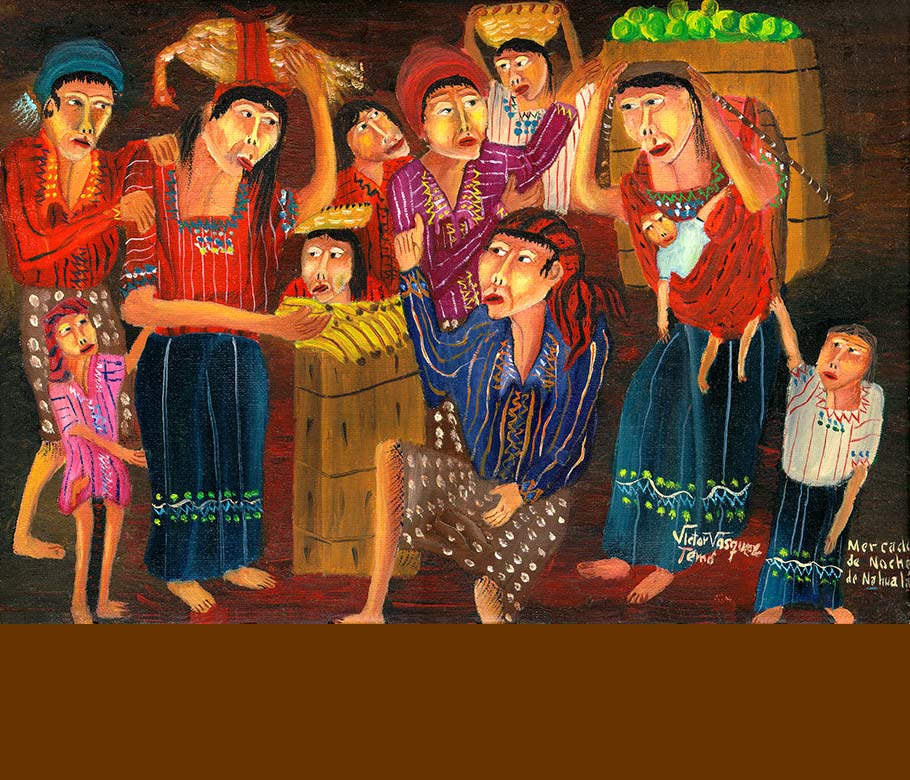 The first oil painting Victor Vasquez Temó painted. Unlike other young Tz'utuhil Maya painters, who depicted scenes as closely as possible to the way their artist teachers painted, Victor paints from his own observation.

Like the children of many poor Maya campesinos, Victor had received a minimal schooling only to the level of sixth grade. He spent most of his time working in other people’s fields with his father. When he was still a teenager, his father died. Being the oldest male, it was up to Victor to support his mother and younger brother. They were among the poorest families in San Juan la Laguna, so it was not until Victor was in his late twenties that he had enough money to buy some art supplies to pursue his dream of becoming an artist.

Victor, Vicente, and I began working together, a partnership which in its initial form would last five years. In 1994, I invited him to visit the United States. Due to his family’s poverty Victor had never traveled much. He had been to Guatemala City only once in his life. He traveled there again to get his visa, and once more to take the plane to the United States. Because Victor was an artist, I wanted him to have a window seat so he could see the sights. Vicente traveled with him to Guatemala City and safely put him on the plane. While waiting for the plane to take off, Victor began chatting with the woman seated next to him. She was a Guatemalan who lived in New York City.  The plane took off and they continued chatting for some minutes, when Victor finally looked out the window. What he saw completely panicked the poor man. The plane was flying in the air. It took the woman seated next too him a few minutes to calm him down and assure him that things would be alright, that all planes flew through the air, that it was completely normal and safe. He later told me that the plane was such a big object that he expected it to travel to the United States on the ground. Because I remembered having seen planes fly over San Juan where he lived, I asked him if he hadn’t seen planes fly overhead. He replied, “Yes, but those were so tiny and this one was so big.” Clearly, Victor was much less knowledgeable about the world beyond San Juan la Laguna than I had realized. 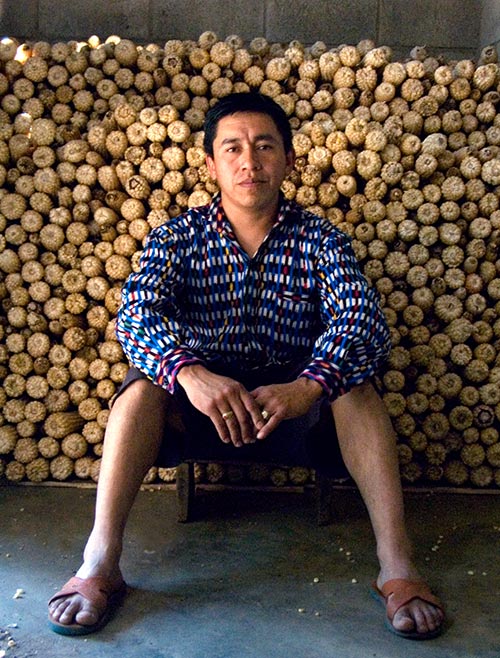 Victor Vasquez Temó in front of the dried corn cobs that he grew and harvested. These ears will hopefully supply his wife with enough "masa" to make tortillas daily for the whole year.

Painting has elevated Victor’s standard of living. Once among the very poorest of the towns’s campesinos, working as a landless mozo on other peoples’ plots, often with only a few tortillas for his meals, he now owns five plots of coffee land which his adviser, Vicente Cumes, helped him buy with income from the sale of paintings. Victor still considers himself a campesino. In the morning he works in the fields returning home around mid-day to paint. Cumes estimates that when the coffee seedlings mature in a few years, Victor’s plots should yield enough coffee to bring in some 8000 quetzales (over $1250) a year, enough to allow the family to live comfortably independent of the art market. Victor is now constructing a larger home to house his widowed mother, himself and three other family members.

After two trips to the United States for exhibitions, Victor decided he preferred working in the fields rather than painting. He married a woman with two children from San Pedro la Laguna who gave him a stability he lacked. Victor clearly loved both of her children. They had a son together. After not painting for many years, he painted one last painting for Arte Maya, Tren de la Muerte. It took him two years to complete. It was one of is most important themes, the dangers of illegally trying to reach the United State, and it is the largest painting in the Arte Maya collection. With money from the sale of this painting, Victor purchased a nice house on the outskirts of San Juan. There are large gardens around the house where Victor grows much of the food they need.