One of the second generation of male Comalapa painters is Salvador Cúmez Curruchich who would prove crucial in helping Comalapa women become painters.  Salvador is no relation to Andres Curruchich, Curruchich being a common Maya last name in San Juan Comalapa. As a child, Salvador’s family worried about him because he had no interest in the things that commonly interest Maya children. He was only interested in drawing. If he had no materials, he would use what was at hand. He would take a stick and draw in the dirt. His family sent him to work in the fields with the men, but he would return early because he was bored.

Salvador's family perceived his artistic inclinations and set him to work learning to weave fabrics by hand. He became very good at it, and when he painted traje (traditional attire) in his paintings, he depicted the designs in minuter detail.

When he was about thirteen, there was an art competition to paint the portrait for a festival honoring a local man who had become a nationally known general. Salvador entered a painting he had done from memory of the likeness of the man, and won first place.  This caused a sensation in the national press because a young boy had beaten all the professional artists, and it launched Salvador’s career as an artist. He would go on to study with surrealist artists in Oaxaca, Mexico.

Salvador's most famous painting is a portrait he did of his grandmother who was a well known midwife in San Juan Comalapa. 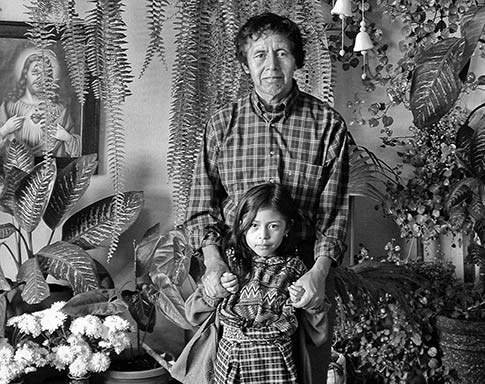 Salvador Cúmes Curruchich with his daughter Delia in 2008. Delia is now a young woman, who continues her parents artistic endeavors. She does theater and dance performances based upon  Maya culture and traditions.

In the late 1980s,  Salvador Cúmez decided to form a woman’s painting collective from interested Kaqchikel women. He taught them how to draw, mix paints and stretch canvas. Drawing on his association with Mexican Surrealist painters, he encouraged them to draw their themes from their dreams. The two most prominent women in the collective were Paula Nicho Cúmez  who became his wife, and Maria Elena Curruchiche, the granddaughter of Andres Curruchich, and daughter of Vicente Curruchich, also an important Maya artist.

Oil painting generally, judging from the number of male artists is considered a man's work. Salvador  has helped break this barrier and wife's fame has eclipsed his. His attitude about this is very unusual among the artists where both the man and wife paint. The division between men's work and women's work, although changing with the younger generation, still is defined, and most of the artists where the wife also paints would not appreciate their wife being perceived as better. 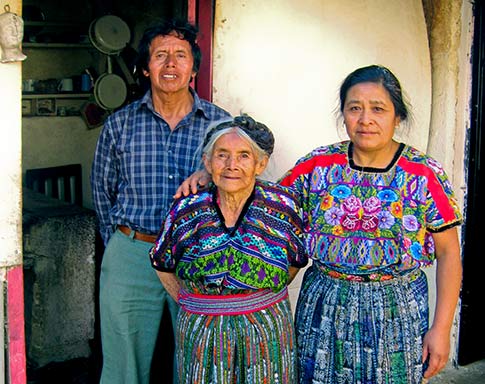