Salvador Reanda Quiejú is the youngest of three artist brothers. The oldest brother, Nicolas Reanda, began painting in the 1960's. These early naíve paintings are among Nicolas’ best works. He opened a gallery in Santiago Atitlán where all the tourists pass as they walk into town. A trustee of the Heard Museum, the largest Indian museum in the U.S., became friends with Nicolas and regularly purchased his work over the course of many years. He eventually donated fifty of these paintings to the Heard collection, and Nicolas was brought to the United States for the opening. The second brother, Jose Reanda, began painting as a teenager, and the younger Salvador Reanda soon followed suit. From the beginning, Salvador showed a natural sense of color and composition. He quickly developed a more naturalistic, less "primitive" style, and came to specialize in large-scale portraits of Tz’utuhil Mayan people. This commercially successful portrait style had been introduced by Juan Sisay and his sons, which the other artists of Santiago Atitlán soon began emulating. Unlike the earlier work, it is more of an amalgam of Mayan and European painting, reflecting the training that the Sisay sons had received in art school. On view here are early works by Salvador Reanda before he adopted a more photo realistic portrait style, demonstrating the extent of his artistic evolution. Salvador and Jose eventually broke with their brother Nicolas; now they each have their own studios that tourists often visit. Indeed, all the major artists of Santiago have galleries where they offer their own large important paintings for sale, along with lesser quickly-painted pieces that they commission artists from San Pedro and San Juan to supply for the tourist market. 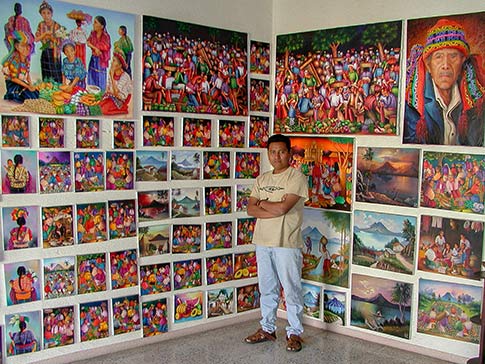 Salvador Reanda Quiejú in his gallery in Santiago Atitlán. The two large paintings in the upper right hand and left hand corner of the photo where done by Salvador. Many of the small paintings were done by Felipe Batzin Navichoc, a San Pedro artist who paints regularly for the galleries in Santiago. The gallery owners, such as Salvador, prefer their own work to be the best in their gallery, so they do not want artists such as Felipe to create paintings that would compete with their own paintings. The owners commission small paintings of specific subjects that are easily sold to the tourists who frequent his gallery. Mario González Chavajay painted for Salvador for many years before starting to work closely with me. Salvador still has several paintings Mario did during this time, two of which are on the right, directly under Salvador's portrait of the man with the headdress (tz'ute).

Salvadore is the youngest and most gifted of three brothers who are painters. Nicolás, the oldest,  has one of the oldest art galleries in Santiago Atitlán, and has helped many young painters from San Pedro and San Juan get started by exhibiting their work their. He began exhibiting works by his younger brothers Jose and Salvador when they were in their mid-teens. In around 1987 Salvador at the age of fifteen began oil painting in the so-called “primitive” style but even then, he had an excellent eye for color and composition. The greatest changes in his art had to do with his depiction of people’s faces and hands. His work became photo-realistic. He and his brother Jose began to specialize in portraits of the residents of Santiago Atitlán. Jose and Salvador parted from Nicolás and opened their own galleries just up the street from him. Salvador  painted Nacimiento when he was about eighteen years old, and his faces were in about the middle of their transition between “primitive” and photo-realistic.