Somewhere out in the wide world there is a robust appetite for paintings of Mayan life produced by Indian artists. That appetite is fed mainly by painters in three of the hundreds of communities that make up the vast Mayan population of present-day Guatemala: Cakchiquel-speaking Comalapa in the Department of Chimaltenango, and the Tz’utuhil settlements of Santiago Atitlán and San Pedro la Laguna on the southern shore of Lake Atitlán in the Department of Sololá.

In San Pedro a young man named Rafael González y González (1907-1996) first produced a painting in 1929. About a year later, in Comalapa, Andres Curruchich (1891-1969) began quite independently to paint scenes of local life on the lids of coffee cans, pieces of wood and flour sacking; twenty years later he was “discovered” by a wealthy Guatemalan coffee planter who sponsored exhibitions of his work that brought him wide acclaim (Asturias 1985). The first painter in Santiago Atitlán was Juan Sisay (1921-1989); he began in 1950 and rapidly became famous. 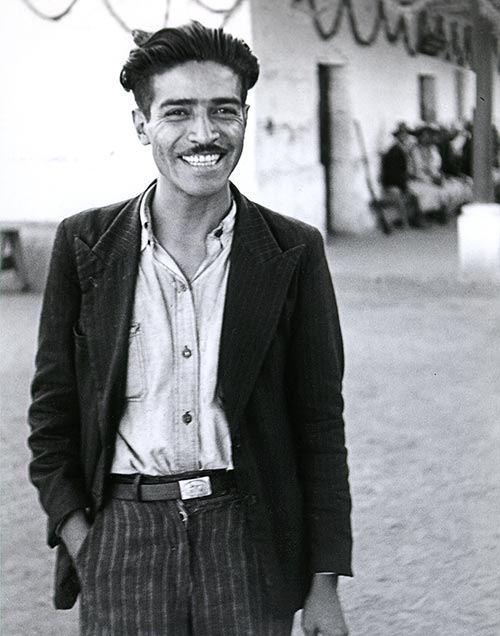 Rafael González y  González in front of the municipal building in San Pedro la Laguna in a photograph taken by Bejamin Paul in 1941. Rafael was one of Paul's better informants of the customs of the people of San Pedro. Paul did not find out for many decades that Rafael was also a painter.

Rafael González was completely unfamiliar with painting in oils when a lucky accident led him to discover an alternate way to paint a picture. With a background of three years of grade school—all that was available in San Pedro at the time—he was nevertheless sufficiently competent in reading and writing to be hired as a local maestro empírico (untrained school teacher) while still in his teens. One Saturday in a practical arts class he was showing his pupils how to color strands of pita (homespun twine) with aniline dyes. They took time off to bathe in the lake. On the way back Rafael stopped to collect some of the white sap exuded by the gravilea trees shading clumps of coffee bushes near the water’s edge. Rafael needed the sticky sap to glue pieces of wood together. Back in the school room, he was too busy with his project to notice that some purple dye had accidentally fallen into the sap container. On returning next day he noticed that the white sap had turned purple (Gomez Davis 1988a) “What’s this!” he exclaimed, “pure paint!” He tested it on a piece of paper; it worked. He was set to paint his first picture.He improvised a palette by mixing varied sap-based colors in separate containers. He painted a landscape on a piece of flour sacking, using a tight wad of his own hair for a brush, and fixed the picture onto a board. A passing tourist liked the painting and bought it for 50 cents, about three times the daily wage of a laborer in those days. He had discovered a new source of cash, albeit a very uncertain one.

Cash was something Rafael needed. Unlike his fellow Pedranos, he shunned working in the corn field with hoe and machete, and needed money to buy corn for tortillas and to pay for other necessities. Teaching was the only salaried job in town, but it paid only a pittance and was a job Rafael managed to hold intermittently. Selling a painting was a relatively rare event in the early part of Rafael’s career. Transportation by motor launch had yet to be established and potential art buyers found it difficult to cross to the southern shore of Lake Atitlán.

To earn money Rafael became a resourceful jack-of-all-trades, serving as a barber and performing a variety of other minor services for a fee. He was well known in San Pedro and in neighboring towns for his manifold artistic abilities: lettering posters, painting saints’ images, decorating chapels and adorning houses of religious dignitaries at fiesta times, whitewashing sepulchers in the town cemetery for All-Saints day, and the like.

People in San Pedro believe that a person’s character is controlled by one’s day of birth. Some men are born to be meek; some are born to be “strong” and to anger easily. Rafael’s character is “strong.” His quick temper often embroiled him in quarrels. In 1942 a long-running feud with a particularly quarrelsome neighbor prompted Rafael to leave town with his wife and children. He accepted a job in one of the many large coffee fincas (plantations) on the piedmont belt south of Lake Atitlán. In return for a small salary, living quarters and a monthly supply of 25 pounds of shelled corn, he served as a teacher for the children of the colonos (resident laborers) on the Finca San Rafael Pamaxan. A few years later he went to work as a paymaster on the Finca Las Maravillas, a long-lasting job. Finally he went to work as paymaster and mayordomo (administrator) on the Finca Chinan before retiring, as the result of an argument, to live in the town of Chicacao in the coffee area, after having spent thirty years on the plantations and raised four sons and three daughters to adulthood. Rafael González y González and his wife Candida visit with Benjamin Paul in Chicaco in the early 1990s. Rafael would visit his home town of San Pedro la Laguna only one more time before his death in 1996. That visit was for the festival of San Pedro where Rafael was honored. Photo Ben Paul

To supplement his modest salary on the plantations, Rafael used his spare time to make coffins and produce paintings on flour sacking with sap-based aniline colors. An uncle took five or ten of the paintings at a time to sell for eight or ten dollars apiece to American officials working for the United Fruit Company in lowland Tiquisate. That was in the early 40s. In the late 40s a series of events completely transformed Rafael’s painting method and launched him on the road to national recognition as an important primitivist artist. He presented a painting to Ernesto Hastedt, his patron (boss) on the Finca Las Maravillas. In return, Ernesto’s wife gave Rafael a gift of oil paints and artist’s brushes. Valentin Abascal, a painter in Chicacao, showed him how to mount canvas on stretchers and to make frames. Rafael was overjoyed and lost no time becoming an oil painter.

In the 50s, with strong support from the Hastedts and Jorge Ibarra, a distinguished Guatemalan naturalist, Rafael exhibited pictures in various cultural and educational institutions in Guatemala City: Colegio Americano de Guatemala, Escuela Nacional de Bellas Artes and Instituto Guatemalteco Americano. But his hopes of being sent to the United States to display his works were frustrated by General Miguel Ydígoras (President of Guatemala, 1958-1963) who objected to sending a ladino (non-Indian) abroad, asserting that the surname González was Spanish, not Indian. Ydígoras did send Juan Sisay of Santiago Atitlán to exhibit his primitivistic paintings in the United States (Gomez Davis 1988b). Countering the adage that a prophet is without honor in his own country, Rafael achieved a signal honor in 1987 when he was awarded the cherished Cruz al Mérito Artístico at a special exposition of his paintings in Guatemala City in belated recognition of his status as the founder of the rapidly rising San Pedro school of painting. In 1988 he was honored as the originator of the popular painting style practiced by the Tz’utuhil artists of San Pedro and Santiago Atitlán with a museum show in Guatemala City. Rafael died in December of 1996, although due to failing eyesight he had been unable to paint for a number of years. At least six painters living in San Pedro la Laguna are directly descended from Rafael or siblings. Two of Rafael’s sons are painters, although neither one lives in San Pedro. 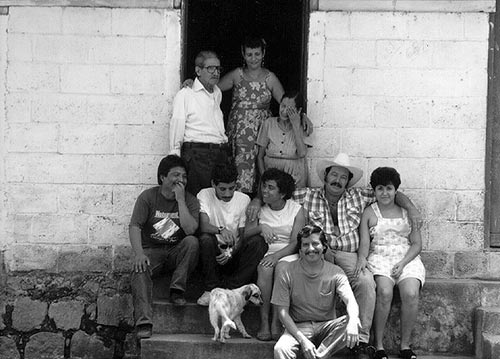 Rafael González y González and his wife Candida stand in the doorway to their house in Chicacao surrounded by their descendants. Three generations of González artists are in the photo. Grandson Pedro Rafael González Chavajay is on the left in the second row; son Rafael Angel González Escobar is seated on the bottom step.