While a few jobs like school teachers are held by both men and women, oil painting has primarily been a man’s job. Traditionally, weaving is woman’s work and her artistic outlet. An artist’s initial investment to buy paints, brushes, and canvas is a hurdle for men, but even more difficult  for young women who have less access to the necessary money.  To become a painter, a woman needs the support of her husband and her family.  There are only three woman painters in San Pedro and San Juan la Laguna. All three are married to artists, and they have learned to paint from their husbands.  Each woman has assisted her husband on his paintings, at first working on the less difficult and important elements, and as they gain skill, on complete paintings. It is likely that none of these women would have become an artist if her husband had not approved and encouraged it.

The traditional roles of men and women in Maya society certainly  influences the paths women take in their lives. Traditional Maya society is hierarchical. The eldest male, usually a grandfather, commands respect as the head of the family. His wife is subservient to him, but her unmarried daughters and her daughter-in-laws are subservient to her. She runs the household where she holds a position of respect. The Maya language reinforces the hierarchical order and the separation of male and female roles. A second daughter will have one word for her older sister, who she obeys, and a different word for her younger sisters, who she can order around. She has only one word for her brothers, who have a ranking among themselves.

When a young woman gets married, she most often lives with her husband’s family where she obeys the wishes of her husband and of her new mother-in-law.  Traditionally, several generations live in one house, or compound. She becomes a helper to her mother-in-law in running the household—cooking, cleaning, caring for any young children, and going to the market. Her husband provides her with money for her household expenses, and if there is time she may weave, to earn a little income for herself.

Today’s younger generation, often the first in their families to complete high school, looks outside of the possibilities their parents had—campesino or weaver/housewife. Many of the younger men have enough money to build a house of their own, which if they build it way from the family compound, gives their wife freedom from her traditional role of subservience to her mother-in-law. All three of the Tz’utuhil women artists lived in such situations.

The first Tz’utuhil Maya woman painter was Vicenta Puzul, the wife of Mariano González Chavajay. Of her six brothers and sisters, she was the only one who didn’t finish high school. In 1988 her father Clemente, a successful San Pedro butcher, was paying for her to go to night school. He wanted her to finish high school so that she could support herself if the need arose. Married Maya women are dependent for their livelihood on their husbands. If their marriage does not work out, they are in trouble if without a marketable skill. Clement’s distrust of Mariano was prudent, because, at that time, Mariano often would go on drinking binges lasting for days. Mariano, for his part, was not happy with Vicenta studying, because she often came home from school late. One day Vicenta, out of curiosity, decided to try creating a painting. When Mariano saw the small painting she had done, a face, he was pleasantly surprised. To see what she could do on her own without his advice, he encouraged her to paint another painting. Satisfied with the result, Mariano began giving Vicenta instruction in how to mix colors, what colors to paint things, and how to paint people. Happy with her new career path, Vicenta’s  father provided her with the money to buy paints, canvas and brushes.

Vicenta’s skill in painting advanced over the next few years. When Mariano’s drinking became worse, they separated for a year. Vicenta and her young daughter lived off of the money she earned by selling her paintings. Vicenta’s brother Diego bought her paintings and sold them in gallery he had opened up with the help of their father. During their estrangement, Vicenta received some painting instruction from Mariano’s younger brother Matías. Vicenta returned when Mariano finally gave up drinking, dedicating himself completely to painting. 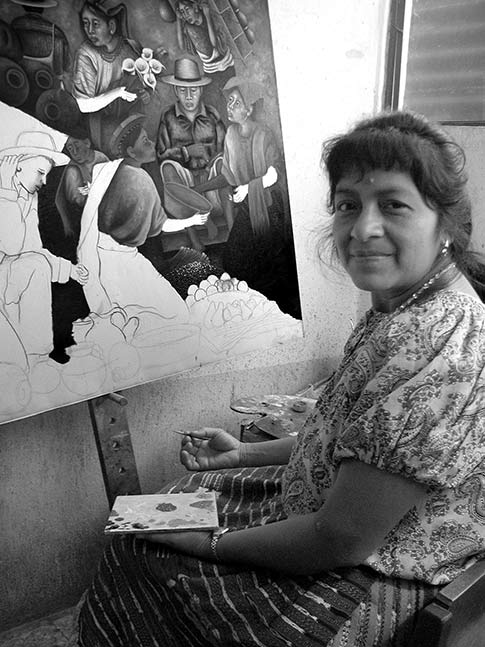 Vicenta works on a painting that she is helping her husband Mariano paint. Vicenta is quite accomplished and knows how to paint exactly in Mariano's style. When they both work on a painting, Mariano was the one to sign the painting. I encouraged Mariano to also have Vicenta sign the paintings they both worked on, pointing out that collectors now like to support women artists. I know she signed a few of their joint paintings, but doubt that she is allowed to sign them all. She does do some smaller paintings on her own.

Vicenta has always been very close with her family. Diego was her sibling most interested in art. He strongly believed that his sister could be come an important artist, and she treasured his advice. Their lives, however, had more than their share of tragedy. In 2000, a bus from San Pedro la Laguna crashed head-on in the mountains with a bus coming from Guatemala City. Twenty-three people were killed. Eighteen people killed were from San Pedro, among them Vicenta’s sister and two of her four children. Vicenta and her brother Diego were inconsolable. She stopped painting for over a year. Vicenta’s two children were grown, but, probably in large part to raise her spirits, she and Mariano decided to adopt a baby, a ladino boy from Antigua.

Then in 2005, her brother Diego came down with meningitis and died. The advice Diego gave his sister about her art had sometimes differed from that of her husband, who often used her as an unpaid assistant on his own commissions. For over fifteen years she has worked closely with her husband Mariano. Vicenta’s skill is such that her paintings are virtually indistinguishable from his. Remembering Diego’s words and his confidence in her, gave her inspiration to take a new direction. She decided to focus on her own art, apart from Mariano and his commissions, with the idea of proving herself, as her husband already has done, to be an important Maya artist.

Mariano’s brother Matías realized that tourists were the easiest source of money. If rather than painting the finely detailed works that he had been doing, he could produce many small quickly-painted ones that would appeal to tourists, he could earn more money.  To this end, in 1992 he began teaching his wife Maria Teodora how to paint, so she could help him in the production of these paintings. 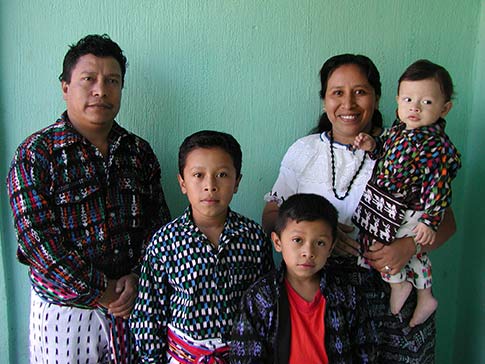 Maria Teodora and Matías pose for a family portrait with their three sons. The money they make from painting small, repeated and rapidly produced paintings for the tourist market has allowed them to build a four story house and send their boys to the University.

Maria Teodora was one of four children. She wanted to study, and finish school. At that time there was no high school in San Pedro. The major cost in schooling, therefore, was the room and board for keeping a student in one of the towns which had high schools—Antigua, Chimaltenango, Quetzaltenango, or Guatemala City. Maria Teodora’s parents, however, could afford to pay for the schooling of one child, the only son. Unable to finish high school, Maria Teodora married Matías. Having enjoyed watching her husband paint for several years, she was happy when he decided to teach her to paint. The learning process took her about six months. She meticulously copied paintings that Matías did, while he explained to her how to draw,  mix colors, and apply the paint to the canvas. Then they went into production. Maria Teodora would paint some aspects of the painting, for example the backgrounds, and Matías would then paint the people and the details. By hiring a young artist to help, they found that they could produce up to one hundred tiny paintings a week. Occasionally Matías would still do larger paintings, and Maria Teodora would often assist him in this, but he would sign the paintings. At some point Matías realized that paintings done by a women were more desirable, especially to women buyers, than a similar painting done by a man, and so he began encouraging Maria Teodora to do paintings on her own.  The two still do production work together, but Maria now has the freedom to do more important paintings.