Pedro Rafael’s life in his own words is compiled from translations of two interviews done with him: June 2002 by Christine Staikidis, and January 13, 1993 by Joseph Johnston.

I was born here in San Pedro la Laguna, this is my community and my parents were Don Herlindo González Escobar and mother was Doña Catarina Chavajay de González. My mother had a hard life. My father was a drunk, he never left food for us to eat. He was a mess, he beat my mother. When we heard that my father was home, we were very scared. We would go to my grandparents to sleep. This was when I was very young. I didn’t want to come home. My grandmother said she would raise me. She loved me because I had an uncle the same age who died, and I looked like him and so since he died, my grandmother took me as her son.

Ever since I was very little, I went with my father every time he separated from my mother. I went with him because he would go to the coast with his parents. It’s not that I liked my father, but rather, I loved painting and I wanted to watch my grandfather, Rafael González y González, paint. He was the initial painter from here along with Juan Sisay from Atitlán. He prepared his canvases and bought his paints. I loved his profession and that’s why I constantly went to the coast.

When he painted, I was always behind watching. He realized one day that I loved to paint. He gave me a white canvas to paint and asked if I would like to copy his drawing. I started to draw it and made it almost exactly the same. Then my aunt arrived and she said I can’t believe that you made this. You drew it? Oh my goodness, how impressive, you will be equal to your grandfather. And I became very encouraged. When I left, my grandfather gave me some brushes and some paints that he could no longer use, and he explained how to paint. He was my teacher. He did not teach me directly how to blend colors, but I watched and learned how he blended colors on the palette. I was watching and that’s how I learned everything. Watching.

In 1970 in the fifth grade I made a painting of a landscape with a house and a quetzal flying over the volcano. All of my friends said to me, how amazing, what quality! No one used oil paint. First they teased saying it was toothpaste, like Colgate. But in the fair of the town of Sololá I had my first exhibition with this painting in the Insituto Abraham Lincoln. A man arrived from Atitlán. When he saw this work, he was surprised and he said that he liked it very much, he would like to buy it. I sold it for one quetzal and five cents. And at this time, I felt I was a rich man with this money.” 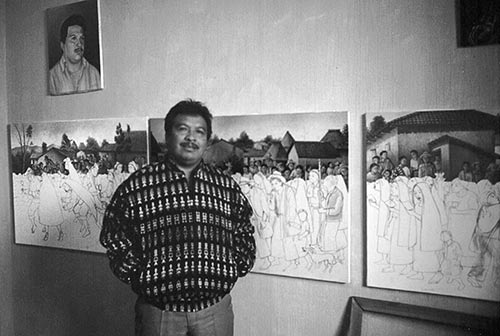 Pedro Rafael González Chavajay with his partially completed triptych, "Huellas de Ayer y de Hoy." The portrait in of Rafael on the wall was painted by Anuto Chavajay Ixtetela who would become an internationally recognized concpetual artist.

My mother always said that I would learn nothing because I was always drawing. I was enchanted with drawing but I also loved studying. Then I began to study, I studied, worked, studied, worked. I had a cousin who lived opposite my father’s house, and I helped him to harvest coffee. We worked in San Juan la Laguna. That’s when I began to really work, at eleven years old. I went to school in the morning and I worked in the afternoon. November, December and January [school vacation  in Guatemala], I worked all day. I earned my money to pay for school. I paid all alone and my parents never supported me. I was told that there was more work on the coast, that I could earn more there, so I went to harvest cotton and pick coffee, I became familiar with many farms where the people from San Pedro worked. Never once did either of my parents ask me why I was going there, never once. When I was twelve years old, I started to look for girlfriends and my friends who hung out in the streets. I entered adolescence but my major problem was where to stay. When night came, I became sad, and thought where could I go? I had friends with whom I could stay but they would eventually tell me that I could no longer stay with them. I started to drink, and when I was really really drunk, I stayed in whatever corner, or corridor, here and there, until the sun rose. But I had to work.

When I graduated from sixth grade and I didn’t even invite my mother, she came, maybe she felt bad because she hadn’t done anything to help me.

I told my father, “I want to continue studying.”

He said, “I have nothing. No, here there is no opportunity to study. You should look for your own life.”

He said he didn’t know how to read or write but he knew how to be a carpenter. And my mother asked why I needed to continue studying, that was for rich people. So they didn’t support me. By myself I began to study in middle school. For one year I continued to study and work simultaneously, but it didn’t go well because it was too much.

Then one of the nuns from San Pedro contacted me to be a gardener, and I went to the Capital. November, December, January, three months I was with the nuns as a gardener. I suffered a lot, I rose at 5:00 a.m. and started to prune the flowers and bushes. I was almost fourteen years old and I didn’t even know what gardening was. My personal desire was to paint. I put my artist ability to one side, I wanted to paint but there was no one to urge me on, no one to animate my desire to paint. I always said to myself, “But how?” I remembered an uncle José Antonio, the painter who lived in the capital. I thought “Where does he live?” Since I was in the capital I began to look for my uncle. I had the good luck to ask one of the gardeners, an old gardener among of us, “Where do you live?”

“In the Fourteenth Zone.’”

Then I casually asked “You don’t know a certain José Antonio that also lives in the Fourteenth Zone?”

Then I went with the man on foot and when we arrived, it was my uncle. So I said, “It is him.”

My uncle said “Hola, Rafael. Are you working here?”

“Let’s do something about that,” he said to me. “Why don’t you help me? You draw and I will paint.”

My uncle knew I was good at drawing and painting. We worked together for two years, 75-76. 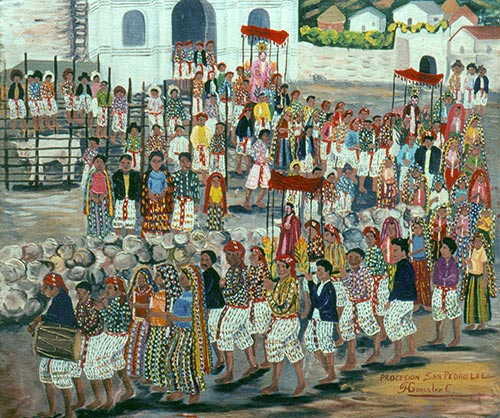 "Processión, San Pedro la Laguna" by José Antonio González Escobar. This painting was in the home of Benjamin Paul. While visiting Benjamin Paul during his first visit to the United States, I commented that the painting was not typical of José Antionio's other work, and Pedro Rafael said that was because he did the drawing which his uncle then painted.

We began, I drew on the canvases and he painted the drawings. José Antonio now had his connections with the Gallery El Tunnel, he was now famous, but El Tunnel did not buy paintings, they carried them on consignment, and afterwards you had to go to see if they sold or if they didn’t sell. We began to look for a market, but there was not a market. We went house to house offering paintings, and we did not like doing this. Sometimes on Sundays we would sell one or two paintings, but sometime none. But one day a woman gave us the idea to go to big hotels in the capital such as the Hotel Camino Real and exhibit on the side where a lot of tourists pass. So on Sundays we placed the paintings on the cement sidewalk outside the Hotel Camino Real, while the people next to us sold flowers, we sold paintings. We sat there, tourists who came sometimes bought and sometimes didn’t. But there was a market where we sold one, two, or three every Sunday.

One day I was seated reading the newspaper, and there arrived a very tall woman, and she began to look at the works and she asked who the artist was, and I said that they were mine and my uncle’s. And she said, “Yours?” Then she asked how much they cost. I said this was 20 Q, the other 30 Q, the other 40 Q.

And she said, “I want to buy some, but you must give me a good price.”

I said: “Senora, we can give you a good price, but my uncle is not here. How much do you want to pay for all of them?”

“There are thirty paintings here. I will pay you 30 Q for each.” She said that in her house she has a small store called Sombol where she sells traditional clothing. “Doña Ruth is my name.” So I went to run to get my uncle. I told him that a woman wanted to buy all of the paintings. He almost had a heart attack. We came running and running to meet her. “And who is the woman?”

“My nephew was telling me that you want to buy each for thirty” and she said “yes” so we grabbed all of the works and carried them to the gallery. It was such a big surprise and there we began. In one week we began to bring her paintings of ours and I told her that I painted and these were my works; and I came then to San Pedro, since I now had a way to earn a living and a market for my work, a gallery which would buy my works.

I then began to study again. The problem was that I loved to drink, some months I made paintings, then was paid, then spent the money, wasted it on drinking. And then over time, I met Deborah, fell in love, and she was the woman I had most wanted in my life, and I wanted to stay with her, but there was another set of obstacles to surmount. Deborah’s Evangelical mother didn’t want to accept me because I was Catholic, drank, and was poor. But then one day we decided that we would go to the coast and then to the Capital to live. That’s how our life together began. 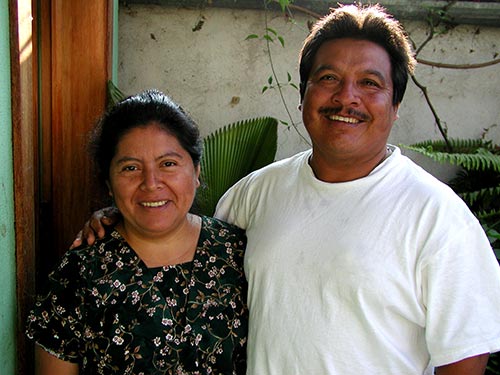 Pedro Rafael González Chavajay with his wife Deborah Agudelina Mendoza in the garden in front of their home in San Pedro la Laguna.