In the 1950s San Pedro was primarily a farming town, but the Pedranos invested in the education of their children. By the end of the century this investment had paid off and some families were able to send their children to the University in Guatemala City or Quetzaltenango. Marlon Puac became friends with fellow Pedrano Lorenzo Cruz Sunu when both of them were attending the Escuela National de Artes Plasticas in Guatemala City. Returning to San Pedro after they graduated, Lorenzo’s brother Pedro Cruz Sunu took on the job of promoting them and their art. Pedro was a charismatic young man and was able to easily talk about the meaning and importance of Tz’tuthil Mayan art and the Maya culture.

Pedro knew who I was and invited me to his house to meet his brother Lorenzo and Marlon Puac and see their work. Lorenzo’s paintings were in the general style of the Tz’utuhil artists of San Pedro and San Juan, but since he had been to art school, the paintings had lost their naïve quality, and at least to me, looked forced and awkward. There were also a couple of paintings by Marlon Puac there. These paintings were quite different than anything I had seen in San Pedro. They combined elements of the Maya culture in a surrealist way. It was clear from hearing Pedro’s spiel, that these paintings were of no interest to him. He only wanted to promote paintings in the typical Pedrano style. 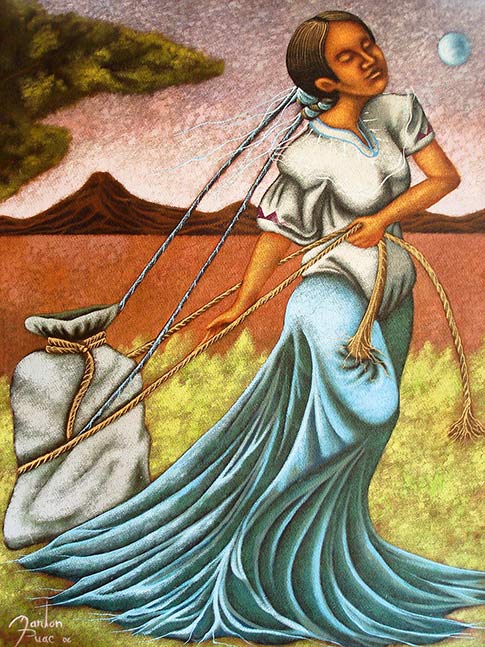 This was one of several paintings by Marlon Puac which his promoter Pedro did not like and did not want to promote or exhibit. This, however, was what Marlon was excited about painting. The typical San Pedro style painting did not interest Marlon.  I told him to ignore his promoter and follow his heart. I told him only that he should make the people in his paintings from the Maya culture and especially from his own town. The one painting by Marlon in the Arte Maya collection is a painting from the series that followed. The Tz'utuhil Maya people and culture are clearly represented in that series.

I met with Marlon at his invitation in his home. He told me that Pedro only wanted paintings in the typical Pedrano style and did not want him to pursue the surrealist baroque style of painting. I told him that his surrealist paintings were astounding and that he should forget about trying to work in the same style as everyone else. I cautioned him that the people in his paintings looked too European, and that he should portray the Mayans from his community. This gave Marlon the confidence to follow his own heart and paint what most inspired him. He set about doing a series of paintings in a surreal style representing aspects of the Maya culture and people of San Pedro.

Marlon worked as a Spanish teacher in one of the Spanish schools in San Pedro. One of his students saw his paintings and helped Marlon get an exhibition of paintings in a gallery in her home town of Houston, TX. I helped Marlon and her with the visas. The paintings in this series were an evolution from the paintings I had seen. The people in the paintings wore the traje (handwoven traditional attire) of San Pedro, and their legs extended into roots that went deep into the ground and symbolically the Maya culture. Marlon visited Houston for the opening and most of the paintings were sold. 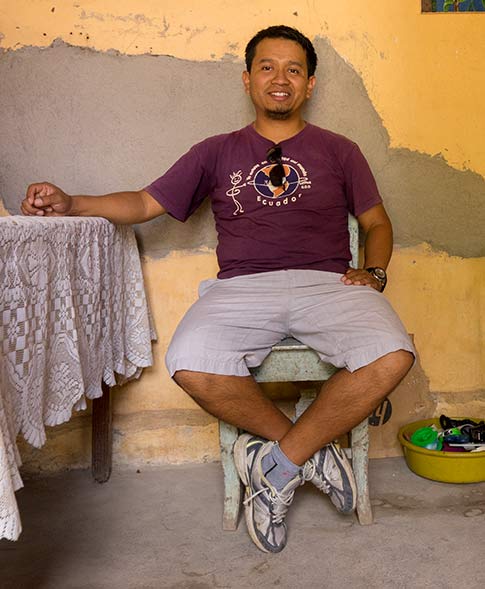 Marlon in the studio next to his house in San Pedro. I feel happy that I was able to support Marlon on his path to becoming an artist.

Marlon’s next series were abstract designs representing the patterns in the handwoven Maya fabrics.  Marlon soon had exhibitions in various venues throughout Guatemala and Central America. Pex Anxux, an American who lives in San Pedro, opened a gallery in the center of San Pedro and appointed Marlon as the director. The difference between this gallery and all the other galleries in the three Tz’utuhil Maya communities is that they are focused on presenting rotating exhibitions the best of the original Tz’utuhil Mayan art, not selling quickly done and repetitive art to tourists. The exhibitions change monthly and feature different artists each month. Marlon, in this position, has been able to support and encourage struggling artists who otherwise might not have a venue.