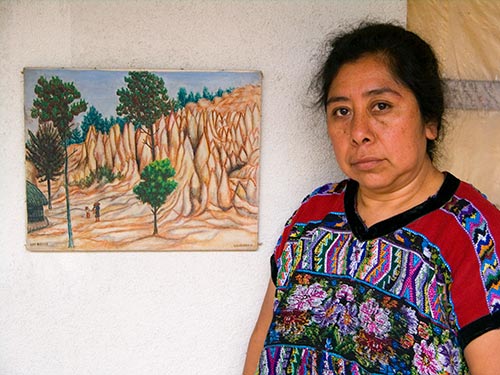 Maria Elena Curruchiche in front of a painting by her father, Vicente Curruchich. The painting is of a strange geological formation called "los roscos" outside of the town of Momostenango. Their house which was the home of her grandfather, Andres Curruchich now has a historic designation and contains a small museum and an art gallery. This is the only painting the family has of Vicente's work. All the paintings they had by Andres Curruchich are now in the Museo Ixchel in Guatemala City.

In the late 1980s,  Salvador Cúmez decided to form a woman’s painting collective from interested Kaqchikel women. He taught them how to draw, mix paints and stretch canvas. Drawing on his association with Mexican Surrealist painters, he encouraged them to draw their themes from their dreams. Linda Asturias de Barrios, a Guatemalan anthropologist, took interest in this group of women artists and wrote about them. She helped organize yearly exhibitions of their work. In 1997, Grupo Maya Kusamej Junan arranged an exhibition of their work at Somart Gallery in San Francisco, California. Paula Nicho Cúmez and Maria Elena Curruchiche represented the collective at the opening. Returning home to Guatemala, the town of San Juan Comalapa sent a bus to meet the two artists at the airport, and staged a triumphant return to the town. The reception Paula Nicho and Maria Elena received was far different than the poor reception Rosa Elena felt she had suffered a decade or so earlier. 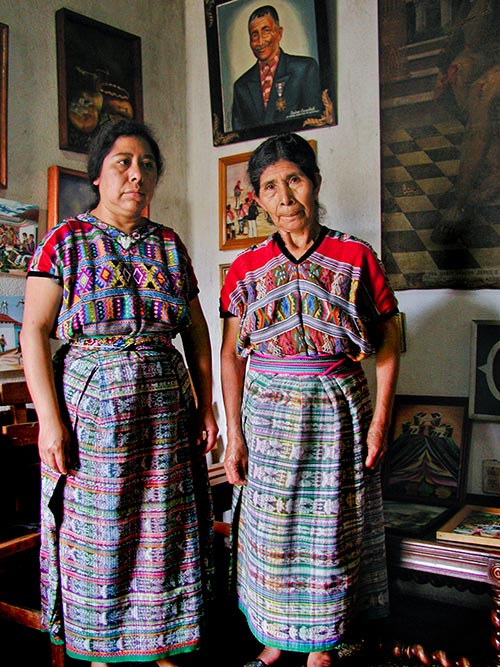 A portrait of Andres Curruchich is on the wall behind Maria Elena and her mother. Maria showed me the medal Andres received when he was given the Order of the Quetzal, Guatemala's highest honor.