Except from A Report from the San Francisco Craft and Folk Art Museum: "Two Naive Painters of the Guatemalan Highlands: Lorenzo  González Chavajay and Victor Vasquez Temó." Vol. 13, No. 1/1995.

What good luck! The proprietor of a tiny San Francisco shop was unpacking a box from his most recent trip to Guatemala just as I arrived, and there among the Guatemalan weavings were two  oil paintings which were obviously from San Pedro la Laguna. But who had painted them? The only clues were the artists initials, LGCH. I had been visiting San Pedro since 1985 when I became interested in the Mayan painters of the town, but surprisingly, I had never seen any paintings like this. The work was very naive, strong, and tropical, different in feeling from work of the other painters with whom I was familiar.

The shopkeeper was delighted to fmd a potential buyer for these paintings, but couldn’t shed any light on its creator; while visiting Lake Atitlán he had bought them from the owner of one of the art galleries in Santiago Atitlán. As I left the shop with the paintings tucked securely under my arm, I was determined to find this artist who signed his paintings “L.G.Ch.,” no matter how long it took.

When I returned to San Pedro six months later, my search was thrown off track by misinformation supplied by a local artist I knew. He told me that L.G.Ch. was the signature of his eight-year-old daughter whom he was encouraging to paint. Pleased to know the identity of the mysterious artist, I bought all the paintings of hers in the local gallery, and returned to San Francisco to tell my friends about the talented child.

Only after my friend Vicente Cumes took me to the house of sixty-four-year-old Lorenzo González Chavajay the following year did I realize, to my embarrassment, that I had been fooled. It had taken me nearly two years to learn the truth. After hearing me relate my story, Lorenzo laughed, but immediately re-signed all his paintings with his full name to prevent future ambiguity. 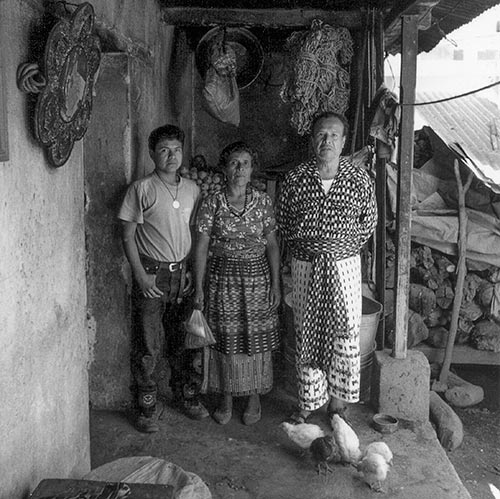 Lorenzo González Chavajay with his oldest child, daughter Maria, and his grandson Hugo. Lorenzo was in the process of teaching Hugo how to paint when he died.

As a young man, Lorenzo González Chavajay was able to get a job with the San Pedro city government because he could read and write Spanish, something that few men of his father’s Tz’utuhil-speaking generation could do. After retiring at age fifty-five from his job as municipal treasurer in San Pedro, he took up drawing in pencil to occupy himself. With no concept of even the most basic conventions of drawing, his early drawings are full of childlike mistakes. His drawings did not seem anything extraordinary, but a friend convinced him it was worth the effort to paint in oil. With the change in medium his drawings, as if by magic, took on a new life.

As so often happens, his art went unappreciated in his own town, especially among better-trained artists. One artist told him that his paintings were good for nothing: “Su trabajo no sirve.” He often gave his paintings away. When the Vicente Cumes first brought me to visit him, his studio was full of unsold paintings. Excited by his work, I came back every few days to purchase a few more paintings and talk with him, until by the time I left his walls were almost empty. Having a foreigner, especially one from the United States, interested in his paintings enough to buy them, brought Lorenzo, in his mind, the overdue artistic validation he had hoped for. Thus encouraged, Lorenzo undertook larger canvases, revealing a power in his work that had been less apparent in the smaller paintings. Unfortunately, just as he achieved a significant level of proficiency and was really coming into his own as an artist, he contracted a liver disease that proved to be chronic. Lorenzo died in March of 1996. He was 68 years old, and had been painting for only seven years.

Lorenzo González Chavajay is notable for his naive style, the only Tz’utuhil painter who can be  truly classified as naive. Neither closely related to, nor influenced by, the paintings of the other artists, Lorenzo is a true autodidact. His paintings are pure color, full of light, and as brilliant as the traditional Guatemalan textiles. Despite his extremely naive drawing style, Lorenzo’s attention to color and textile makes him perhaps the most deeply Guatemalan of all the region’s painters. He patiently depicts his fellow Indians and makes the clothes of each person different. Every Mayan town has a unique style of dress including distinctive patterns and color combinations. Within the framework of her village’s tradition, each weaver makes subtle variations in each piece she creates. Even though it takes more time, Lorenzo enjoys painting these subtle differences in pattern and color. Since Lorenzo painted for himself, rather than to sell, it did not matter to him that the varied traje took more time. In some of his paintings the traje of the Pedrano men and women creates a wonderful effect, almost pointillist in nature.

Even in the midst of great activity, the people Lorenzo paints look stiff, perhaps more so because of his habit of drawing the figures first on paper and then cutting them out and tracing their outlines on the canvas. He saved these cutouts, and sometimes used a person or group in more than one painting. At all times his studio wall was alive with paintings, and as long as they were on his walls, he could not help modifying them. He touched them continually to see if the paint has dried. 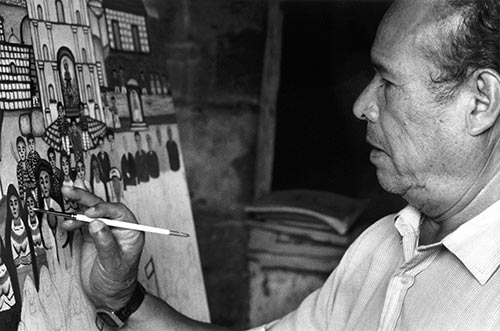 Lorenzo González Chavajay working on his first large painting "Domingo de Ramos San Pedro la Laguna" in 1994. His large paintings showed his power as a naíve artist. I commissioned him to do twenty more large paintings because I believed that would make him famous. Sadly, he  was able to complete only four more paintings of comparable size before he died.

Lorenzo, being twice the age of most Tz’utuhil Maya artists, remembers from his own life the vanishing traditions and puts memorable events from his life into his paintings. The cofradías as part of the Catholic church, for example, disappeared from San Pedro before 1970. Of this Lorenzo told me:

In the past there were many customs in the town. The motor boat did not exist, there was no bus. In those times there was nothing sold in town, not even sales of medicines. There was no such thing as general stores or grocery stores, not eating places or guest houses, there was nothing, nothing, nothing. When people came from outside the town, they had to sleep on the porch of the school. Here the poor people came to rest, people who came from afar to sell earthen jars, to sell garbanzos, to sell beans. They came all the way from Totonicapan just to sell. Before, only canoes existed. One had to go by canoe to Panajachel, to Santiago Atitlán. On the path from here to Quezaltenango, our ancestors carried heavy loads, like the load carried by pack animals. They came from Quezaltenango, three or four days walk, but there wasn’t any road. Today it is distinctly different, there are many roads. There weren’t a lot of people—very few. In the past there were many customs in the cofradías. The customs were lovely, very lovely. In the Church there were six cofradías  which were the Sacrament, the Virgin Conception, Saint Nicolas, the Holy Cross, Saint Anthony, and the Rosary. And each cofradía had its mayordomos (stewards), those whom they call juez (judge), and those who you could say are secondary cofrades. There are many things from before that I know, that I saw because my father was the one that did this job. All the cofrades came over here to visit my father, who was the teacher, the teacher of the church they called him. He worked many years before he died. He preserved all of the customs, he discharged a lot of time in service of the Church. He also worked as much in the [traditional] municipal hierarchy as in the Church. Therefore that is how I know the various customs. Yes, there were a lot of customs before.

In refining his art, Lorenzo followed his own spirit, learning from his own mistakes. Considering his inaccurate perspective, mistakes in the relative size of objects, and the stiffness of his figures, one might dismiss his small paintings as the work of just another minor artist. But Lorenzo’s larger canvases, by allowing him to increase the scale and complexity of his unique tapestry of patterns and colors, reveal the power of his compositions. Lorenzo’s experiences, because of his father’s central position in the Tz’utuhil Maya traditions of San Pedro, often emerge in his paintings and make the smallest details historically significant.

At the conclusion of the interview I had with him before his death, Lorenzo González Chavajay said of his paintings: “I paint because the person who is dedicated to painting leaves unforgettable memories of their life. These memories remain from my life. When one dies people only remember  ‘that was so and so.’ They remember these paintings were done by Lorenzo, these paintings by other artists. They remember nothing of your life. That is how it is.” 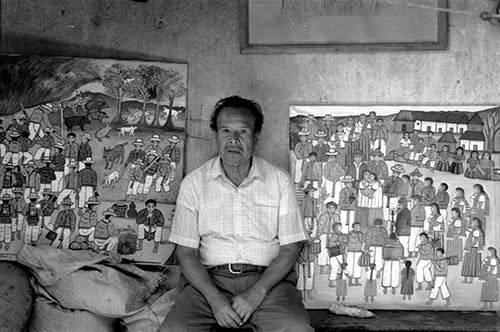 Lorenzo with two of the last paintings he finished. He died in February of 1996 a few months after I took this photograph. His energy was already diminishing, and he was jaundiced.