José Antonio González Escobar was born the 23 of August 1941 in the Mayan community of San Pedro la Laguna. He was the seventh of eight children, four boys and four girls. He and the eighth brother, Rafael Angel, were the only two to become painters like their father, Rafael González y González, the first Tz’utuhil Maya oil painter.

When he was young his family moved from the highlands of Guatemala over to Chicacao on the hot coastal side of the San Pedro volcano. It was there that he learned how to paint. His father had the job as the overseer of the workers on a coffee plantation, the Finca Maravillas. His father would come home from work around 5:00 and start to paint. It would get dark, so José Antonio would light candles so that his father could see. It was by watching his father paint that he learned to paint himself. When he painted his first two paintings, a visiting American who his father knew bought them. That was how he began. In 1971 when he was thirty years old he moved to Guatemala City. In 1976 his oldest brother’s son Rafael came to live with him in Guatemala City. José Antonio taught him about painting and Rafael did drawings for his paintings. At that time, they had to go door to door selling paintings usually on Sundays their day off. One Sunday a German woman, Doña Ruth who had a small shop near the big hotels in Guatemala City saw their paintings and bought them all. After that they had a ready market for their paintings and Doña Ruth became the person who started off the other naive artists who came after José Antonio.

In 1977 José Antonio at the age of 35 traveled to the United States with an exhibition of about 100 paintings of Mayan artists from all over Guatemala. This included paintings by his father Rafael González y González, Juan Sisay of Santiago Atitlán, and Andres Curruchich of San Juan Comalapa. The exhibit was eight days each at four universities in Alabama: The University of Alabama, Tuscaloosa, Birmingham and one other whose name he has forgotten. 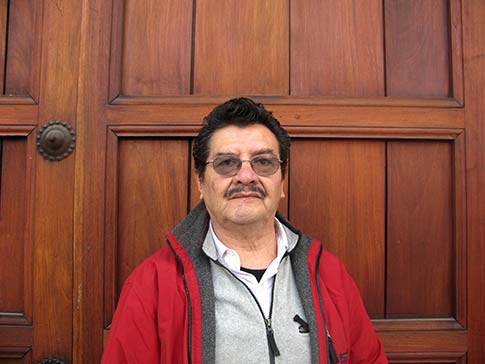 José Antonio González Escobar in front of the doors to the colonial Catholic church in Comunidad Hermano Pedro, a small village just outside of Antigua Guatemala. José Antonio almost always includes a catholic church centrally in his paintings. He used to own a house in the suburbs of Guatemala City, but when gangs took over the neighborhood, his family was forced to relinquish his home to them and move to a safe place. They now live with relatives of his wife.

José Antonio does not have a name for his style of painting but says that it was very close to the style of his father and very different from the other painters of his hometown of San Pedro or those of San Juan Comalapa. More than his father, he specializes in the Colonial Catholic churches in the Mayan towns of Guatemala. He may paint the church buildings the same, but like the paintings of his father the people in the paintings are always different—in different positions, different dress, different activities.

Since he was a boy in San Pedro the Mayan traditions have undergone a great change. When he was a boy, nobody except the teachers could speak Spanish. Tz’utuhil was the language used by everyone. Now most of the younger people not only speak Spanish, but read and write it. When he was young all the men wore the traditional traje [dress or costume] of San Pedro, but now it is worn mainly by the very old men or only on special occasions.

José Antonio is very proud to be a Mayan and a Mayan from San Pedro la Laguna. Perhaps he is most proud of being the son of the first Tz’utuhil Mayan oil painter. He feels that through his father and the culture of his town, the Mayan traditions live in his heart.