Part I
The Accident Painter

Victor Vasquez Temó introduced me to his fellow Juanero artist Diego Isaias Hernández Mendez. The walls of the tiny room where Isaias lived and worked were covered with his drawings in pencil, ink, crayon, colored pencils—whatever materials he could get his hands on. Among them were two unusual drawings of people being chased up trees by snakes. Many of his drawings were of accidents, people knocking other people over, or dropping such things as all the coffee berries they had spent the morning picking. At that time, Isaias was a self-taught sculptor, but although tourists showed interest in his work, none of them wanted to buy the heavy stone objects because of the impossibility of transporting them in their backpacks. Consequently Isaias was interested in trying oil painting instead. Before meeting Isaias, Vicente Cumes Pop and I both had counseled Victor to paint on his own for a year or so before trying to take lessons from someone else. We gave the same advice to Isaias because we felt this would help him preserve the unique vision he had, rather than conforming his painting style to that of a teacher. 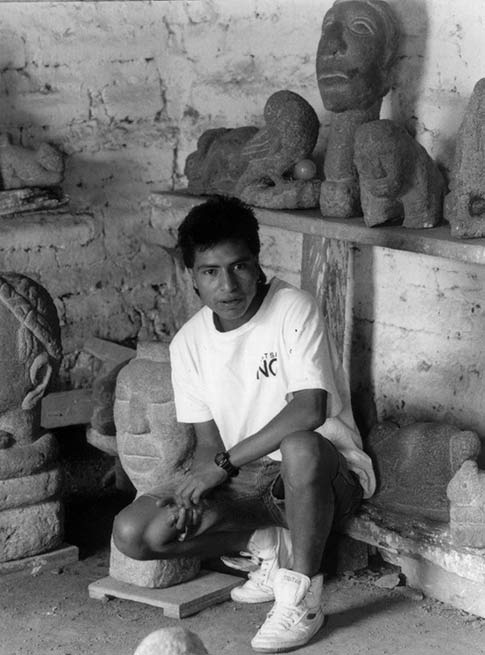 Diego Isaias Hernández Mendez in his sculpture studio in the mid 1990s. His sculptures, because of their size and weight proved unsaleable to tourists, the main market for art around Lake Atitlán.

Two years later, before my planned trip to Guatemala, Hurricane Mitch came through, devastating Nicaragua and Honduras, and causing significant damage in Guatemala and Belize. My plane was the first plane to be allowed in after the hurricane. It took me several days to get out of Guatemala City because the roads leaving the city were blocked by mudslides. When I arrived in San Pedro, Vicente and some compatriots were raising money for victims of the hurricane. They had gotten together around two hundred sacks containing fifty pounds each of corn, beans and  rice, and also some clothing. They traveled around the nearby countryside giving them away to the remote communities who had lost everything. They accomplished this within five days after the hurricane, before any international aid had arrived and while the governments were still discussing how the relief effort was to be handled.

The following week, Vicente and I walked to San Juan to visit Victor and Isaias. Isaias, surprisingly, had listened to our advice about painting on his own. He showed us two small paintings entitled “Mitch.” They showed people clinging to their rooftops as their houses were washed away by a torrent of water. Impressed, I asked him to paint me a large painting of the same theme. He had not done so by my visit the following year, and so I repeated my request, asking him to leave it with Vicente. Isaias finally did the painting, but he did not leave it for me with Vicente. Instead he entered it into the most important art competition in Guatemala, a biennial sponsored by Guatemala’s biggest department store, Paiz, a major patron of the arts. This painting won first place in his division, Pintura Popular, winning him 5,000 quetzales and considerable recognition. 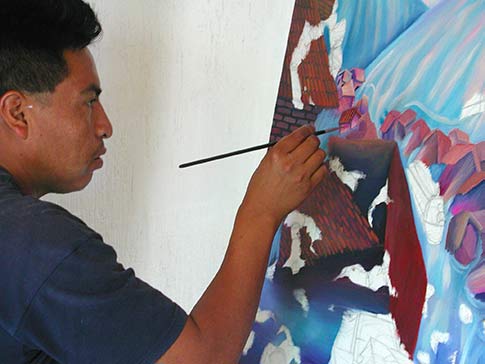 Isaias won the prestigious "glifo de oro" in the Paiz Biennial for his painting of people and houses being washed away when Hurricane Mitch went through Guatemala.

On Victor’s first visit to the United States, he had brought up three small paintings by Isaias. They didn’t appear to be anything special. Since they were small, I scanned them, and for some reason I printed them out. The brilliant colors really surprised me with how spectacular they made Isaias’s paintings look on paper.

In 1999 I was approached by Duck Soup publishing to find a Maya artist for a children’s book on Guatemala. There was a deadline of three weeks in which the artist would have to complete about forty-five paintings for the book. Isaias seemed an obvious artist for the job because his painting reproduced well, but the fact that he  could paint more quickly than the other artists was the deciding factor. After I negotiated five weeks rather than three, I flew to Guatemala to start work with Isaias. His mother was gravely ill, so for the first five days he did no painting, only traveling across the lake to the hospital in Sololá. I knew that if she got worse the book would never get done, but fortunately she got better. In the remaining time, we had to get out about two paintings a day, a seemly impossible task. I visited him every morning and late some afternoons checking on the progress. By the time I had to leave, we had the thirty-five assigned themes and another fifteen extra paintings.

For several days I watched him as he painted. His technique was different than the other Tz’utuhil artists. Whereas they would carefully paint the painting from top to bottom, completing one part at a time, Isaias would work on the ground for the whole painting at a time, playing with the colors until he got them where he liked them. The painting would have as many as five different color incarnations in the course of the day. The next day when the original ground had dried, he would paint the figures and any defining detail. 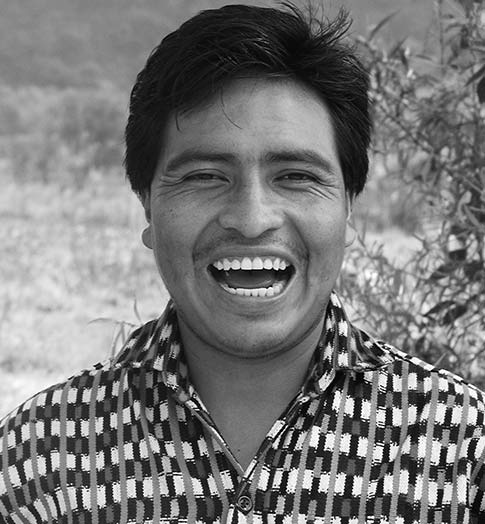 Isaias is probably the most jovial person I have met. He is always smiling and joking. He is known in Guatemala as the accident painter. Rather than cry, he laughs at the problems and accidents life brings us. The one exception to this is when he is talking about money. Like many Maya men, he is not good at managing the money he does get.

Victor and Isaias have some similar qualities to their painting, qualities which set them apart from all the other Tz’utuhil Maya painters. They capture the motion of people. Whereas the other artists’ paintings look static, almost posed, you get the feeling from the paintings by Isaias and Victor that, if you looked away for a second, the people would be in new positions when you looked back. They are very much alive. This similarity of movement is reminiscent of the ancient Maya paintings on the sides of pottery or the murals at sites such as Bomampak. In none of the other Maya painters I have seen—self-taught Tz’utuhil or Kaqchikel, or even the schooled Maya painters—does this connection show up as strongly. Why it exists is a mystery to me. Neither Victor or Isaias had seen any ancient Maya paintings before they developed their own style, so it was something which rose up independently from within their being. 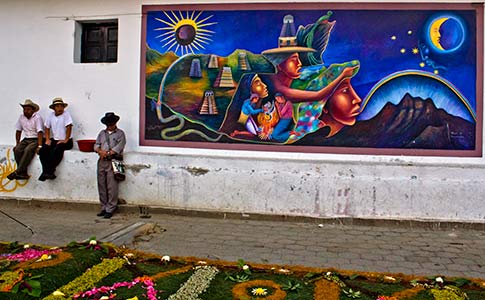 Maya traditions and spirituality are the theme of this mural Isaias did in 2012. The best artists in San Juan la Laguna all did murals, and Isaias won the competition with this mural. Sadly, the weather has taken its toll on the mural.

Around 2004, Diego Isaias painted Señales de Lobos Viendo el Tiempo Bueno o Malo, a painting which show wolves perceiving the climatic changes of weather. It also had the sun and the wind personified with human faces. This painting marked a turning point for Isaias in two aspects. After this painting the dogs, coyotes, and wolves in his paintings were shown aware of spirits that humans could not normally perceive. Increasingly his paintings gave voice to basic ideas of the traditional Maya religion and cosmos. There is a Tz’utuhil phrase Ru kux which means “heart of, spirit of.” The Maya use it with all sorts of things: heart of the mountain, heart of the lake, heart of the sun, heart of the wind, or even heart of a rock.

This painting marked the beginning of a new direction for Isaias. He started including the visual personification of spirits in his paintings. He still often painting accidents, but now these accidents might be caused by dogs being startled by a spirit. The spirits he paints were quite varied—the spirit of: mountain, the wind, maize, dead relatives on Día de los Muertos, caracatoles (humans taking the form of animal), shamans, elders, or people who are very ill, etc. Animals, in his paintings, could often perceive things humans cannot. Humans were unaware of parts of the cosmos that were directly affecting their lives. Maya Folktales, a book by anthropologist James d. Sexton, tells of these spirits and what happens when humans ignore them. Isaias among all the Maya artists is the one who most clearly includes these Maya beliefs in a visual manner in his paintings. 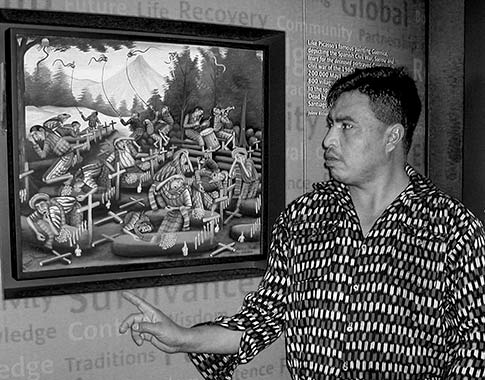 Isaias in front of his painting "Dolor y Llanto por los Difuntos" (Sorrow and tears for the deceased) at the opening of the Smithsonian National Museum of the American Indian in Washington D.C. This painting was commissioned by Tere Romo for an exhibition for Día de los Muertos at the Oakland Museum in 2002. It was subsequently bought by the National Museum of the American Indian where it has been on display since the museum opened in 2004.  Jolene Rickard, guest curator, and curator Gabrielle Tayac posted this commentary on Isaias’s painting: Like Picasso's famous painting Guernica, depicting the Spanish Civil War, Sorrow and tears for the deceased portrayed Guatemala's civil war of the 1980s, capturing the loss of 200,00 Maya lives and the destruction of 800 villages. In this work survivors connect to the spirits of loved ones on the Day of the Dead by flying kites above the Maya town of Santiago Atitlán.