Emilio González Morales was the first of the three brothers to become painters. Emilio studied with Mariano González Chavajay in the early 1980s. Mariano’s first student was his brother Matías, but Emilio was his first student outside the family. Emilio, in turn, taught his older brother Juan Fermín, and his younger brother, Lorenzo, how to paint.

Emilio has a small gallery in the front of his house and manages everything as best he can for the three brothers. Juan Fermín, for whom artistic creativity seems to come the most easily, has a drinking problem. As is typical with alcoholics in Mexico and Guatemala, he will go on binges where he stays drunk for days or weeks. Lorenzo, like his mother, was born a dwarf. He is very self-conscious and shy,  seldom leaving the house. I knew Lorenzo for nearly fifteen years before he would allow me to take a photograph of him. It was only when I got him to understand that it was possible to take a photo of his face only, and not his whole body, that he allowed me to take the photographs. Lorenzo works in watercolor. His paintings, although they deal with the Maya people and traditions, seem closer to the European painting tradition than the customary Tz’utuhil style of painting. Of the three brothers, Lorenzo creates paintings with the finest detail. 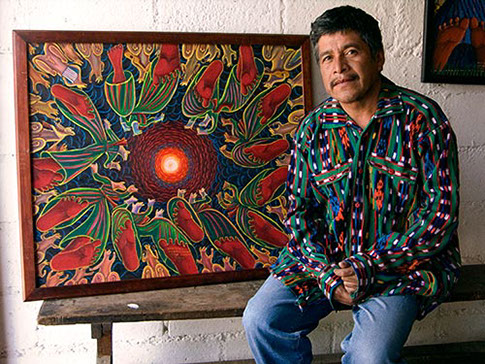 Emilio González Morales in the gallery in the front room of his house. Emilio also has a sewing machine in the room where he works as a tailor. The Tz'utuhil artists whose primary income is from other work, generally create better paintings because they don't have to rely on what sells easily to tourists.

Juan Fermín was forcibly inducted into the Guatemalan army and served during the time of violence. It seems likely that his experiences in the army, during a time when over 200,000 Maya were killed mainly by the military,  have contributed to his drinking problem. During his military service he rode in helicopters. He drew on this experience and began to do paintings from the bird’s-eye (vista del pajaro) point of view. 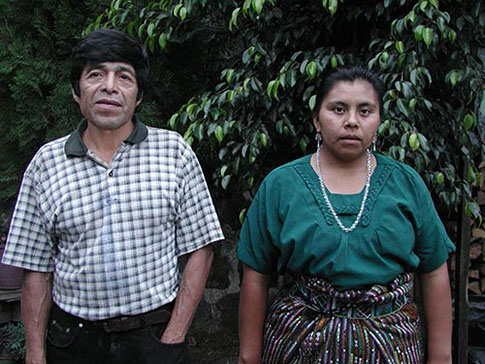 In the late 1980s, another Pedrano artist, Abraham Batzim Navichoc, also began painting from the bird’s-eye viewpoint. He entered his vista del pajaro paintings in the Biennial de Paiz, Guatemala’s most important cultural event. Abraham won honorable mention in 1992 and first place in 1994. Abraham gained national fame with his win. Shortly thereafter, vista del pajaro paintings by other painters started appearing in the galleries in Santiago Atitlán. These proved very popular with the tourists, and soon the young artists who painted for the galleries began producing them by the dozen. The tourist paintings had lost all the cultural details that Juan Fermin put in his paintings, and became formulas—usually depicting a market or work in the fields. Juan Fermín received no recognition for his idea which proved a boon to the galleries and young painters, nor did it help the sale of his paintings. The tourists wanted small paintings they could easily carry home, not the larger format that Juan Fermín generally painted in. Vista del pajaro paintings still flood the galleries in Santiago Atitlán and are now produced by the thousands.

Emilio is one of the few artists in San Pedro who does not try to sell his (and his brother’s) paintings immediately. He puts aside the best of their paintings for exhibitions and sales at some later date, hopefully for a better price. He does not sell to the galleries in Santiago Atitlán, who pay very poorly and give the artist only about a third of what they sell a painting for. Emilio knows the value of his work and his brothers’, and he also realizes that, as their reputations increase, the value of their paintings will also go up. He prefers to wait for the occasional tourist who will pay a fair price.

A half -hour video in Spanish and Tz'utujil Mayan about the González Morales brothers. It includes testimony by artist Samuel Cumes Pop who testifies from first hand knowledge  that Juan Fermin was the originator of the "Birds-Eye_View" style of painting, in spite of several other artists false claims. It was produced by Antonio Pichillá and Benvenuto Ch'abaq jaay.

Juan Fermín González Morales. When Juan Fermin is sober, his brothers provide him paint and canvases. The paintings done in his sober periods are much more colorful and always have a lot of content about Maya traditions and daily life.