When I travel to Guatemala, I always go to Santiago Atitlán for at least a day trip. I enter all the galleries just to see what is currently popular with the tourists, and to see if there might be a surprising find. I stopped in the gallery of Nicolas Ramirez and was surprised to see among all the all paintings some tiny water color or gouache paintings that seemed surprisingly fresh and unlike all the other paintings in any of the galleries. Some of them were painted by Nicolas and some were painted by Juana Elva Vasquez, who I found out was his wife. They were inexpensive, so I bought as many as my budget would allow because I was sure I could easily sell any I did not want to keep myself. I got a telephone number from Nicolas because I thought I might want to have them paint more for my next trip.

Getting them home I looked at them carefully, and all the best paintings, about half, had been done by Elva Vasquez. The paintings sold well so before my next trip I called Nicolas and said I would like more. When I arrived, I was disappointed to find out that all the new paintings were signed by Nicolas. I do not think he painted all the paintings, but he clearly wanted his name to be the one associated with the paintings. As a result, I did not buy as many as I had been hoping to. I had been pleased that this very unassuming woman was a good artist and I had wanted to help her. People had liked the paintings particularly the ones painted by Elva because she is a woman.

I was approached by a publishing company that wanted to use one of her paintings in a book. I arranged for Elva to get as much for the reproduction rights as the project’s budget would allow, knowing that once it was changed from dollars into quetzals it would be several hundred. I was excited to be able to surprise her with this. When I arrived in Santiago, she was in the back of the shop making tortillas. I presented her the money telling her what it was for. I was not very astute, because her husband was there, and he took the money out of her hand and put it into his pocket. It was too late. I had handled things wrong. I should have given her the money when he was not around. There is a reason why more women are not artists. The Maya men still want control. 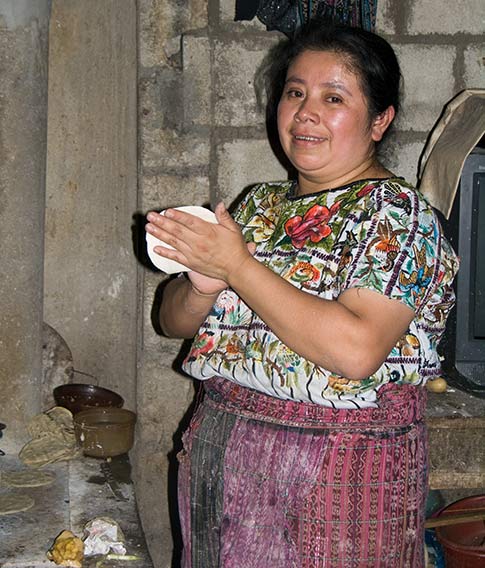 Juan Elva Vasquez making tortillas in the kitchen in the back room of her husband's art gallery in Santiago Atitlán. Elva is a very humble person. Her husband is the one who deals with all the tourists entering the gallery.

Elva is either from San Juan la Laguna or San Pedro, but she married Nicolas who is from Santiago Atitlán. He is lucky to have a shop on the road from the dock to the center of town, because that is where the tourists arrive by boat from Panajachel several times a day. Nicolas Ramirez had other oil paintings, but they were not nearly as good as the small watercolors.