For many of the Tz’utuhil Maya artists, very few examples of their early work exist. Artists seldom keep a painting for themselves, because the sale of any painting generates significant income for a poor campesino family. Without this painting, I would not have any examples of Domingo Garcia’s early style. How this painting happened to survive is perhaps as interesting as the painting.

When my friend Vicente Cumes Pop began to introduce me to the oil painters of San Pedro la Laguna, one of the first artists he took me to was Domingo Garcia Criado. Domingo took up painting in the early 1980s, but, unbeknown to Vicente, had given it up because he could not find a market for his paintings. When we visited Domingo’s home, he told us he had nothing to sell.  Domingo spoke in Tz’utuhil, so Vicente acted as interpreter between us.  He  offered to show us seven paintings that he had done a few years before, but, Vicente told, me he wanted to keep these paintings for his mother. I was impressed by these paintings, especially one titled Tejedora. Vicente mentioned that Domingo might sell it to me if I persisted, but, impressed by the politeness and humility of Domingo, I did not want to try to change his mind. 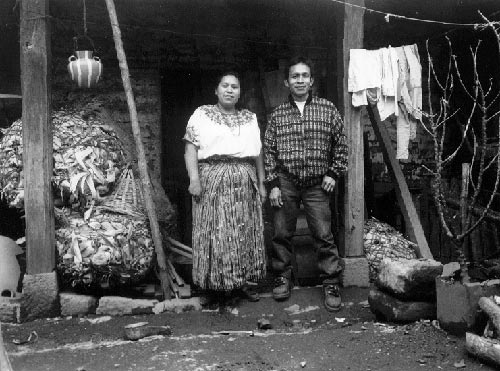 Domingo Garcia Criado with his wife Dolores. I took this photograph in around 1988. Since that time most of the adobe structures in San Pedro have been replaced with concrete block structures which fill up what used to be interior courtyards.

Domingo’s paintings excited me. Both Vicente and I repeatedly told him that he should continue painting. Since Domingo wanted to keep these early paintings, I decided to try to get him to paint  new  ones. Domingo seemed willing, but Vicente explained to me that the problem was that he had no brushes and no money to buy them. I agreed to buy him some in Guatemala City, and mail them to him. At the post office in Guatemala City, I was told that the way I wrapped my brushes was unacceptable. My understanding of Spanish at that point was limited, and I left the post office to buy still more mailing supplies. Returning with a re-wrapped package, they told me that it was still not acceptable, and that it probably would never get to San Pedro. Finally a sympathetic woman came to my rescue and accepted the package with no guarantee that it would get there. I just assumed Domingo would never get the brushes.

But the brushes did arrive, and Domingo Garcia began painting again. Doña Ruth, who ran the gallery in El Sombol in Guatemala City, liked his paintings and began buying  them regularly. Domingo attributed his success to my insistence that his gift for painting was too good not to put to use.  A couple of years later when I stopped by to visit him, he wanted to show his gratitude by giving me a painting from those original seven. During the intervening time, he had sold one of the best, so I decided to accept Tejedora rather than let him sell it to someone else. When I visited  Domingo on my next trip to Guatemala, I discovered that Domingo had tacked those paintings to the wall of the portico outside his room, and exposure to the weather had badly damaged all of them. By accepting his gift, I had saved Tejedora from destruction. 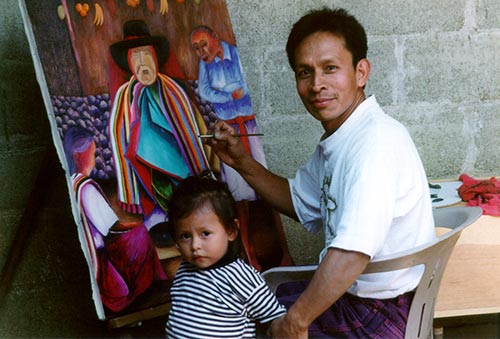 Domingo Garcia Criado works on a painting of Maximón, a popular folk saint in Santiago Atitlán.