Chema Cox & Edwin González
A Departure from the Naive Style

José Maria (known as Chema) González Cox (b. 1961), the only son in a family with six children, is a grade school teacher and a painter. He is polite, intelligent and more worldly than his fellow Pedrano artists. He has traveled considerably and been influenced by painters outside his home town. His grandmother is a sister of old Rafael González. When Chema was 5 or 6 years old, she took him along on visits to her brother on the coffee plantation where he watched Rafael González paint. He was indelibly impressed. In the third grade he won a prize in a drawing contest. On finishing grade school, he asked his parents to buy him paints. Better to buy a hoe and machete, said his father. Chema went to work picking coffee for ten cents a day until he had three dollars. His mother gave him two dollars more. He bought oil paints and brushes and began painting at age 14 in 1975—just two years after Pedro Rafael began. He made his own frames and used a kitchen plate for a palette.

A fellowship enabled Chema to attend básico or the first three years of secondary school at a live-in Catholic seminary in Sololá. There he met an older student from Comalapa who was a painter. They worked together. The seminary priests bought their paintings for two or three dollars each. Chema liked to paint children at play most of all. He completed diversificatión or the last three years of secondary school in Quetzaltenango where he attended teacher-training classes in the forenoon and painted in the afternoon for money to help pay his keep. Weekends he traveled by bus to Guatemala City to sell paintings by making the rounds of office buildings or leaving them on consignment at an airport gallery. In Quetzaltenango he took classes from a nationally recognized painter and avidly read books about Renaissance and Impressionist painters.

Chema Cox with his wife Maria, their daughters, and Chema's mother outside of their house in San Pedro la Laguna. Chema now is a successful lawyer and has added two stories to the house. What was their living room is now the reception room for his clients. The family lives upstairs.

At one time Chema shared a studio with another local artist named Felix González Chavajay, not a near relative of other painters with the same twin surnames. The two friends exhibited together, among other places, in tourist-frequented Antigua, where Felix lived for a while and where local artists find a market for scenes of colonial buildings painted in water colors or oils done in the softer tones of water colors. An awareness of this style seemingly accounts for Chema’s loss of interest in the typical Pedrano style of painting. Around 1990 he began working in paler tones with more light. For painting landscape backgrounds, he resorted to the spatula, an artist’s tool not generally used by the Pedrano painters. The figures, however, he still painted with a brush using the same strong bright colors used by the other artists of San Pedro. 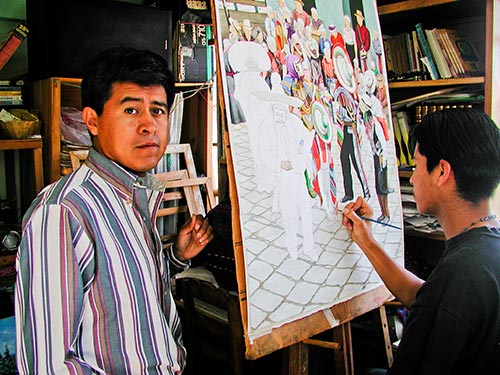 Chema Cox and Edwin González in Chema's home studio. Often both artists would work on a piece, but more often than not Chema would be the one to sign the painting because he had the contacts and reputation which made the paintings easier to sell.

In the early 1990’s Chema also began experimenting with painting in watercolors, a technique that seemed more suited to the softer look he was interested in. Shortly thereafter, Chema began teaching his nephew Edwin González, who was still in his teens, how to paint with watercolor. Edwin immediately excelled. Within a couple of years, their watercolors, which had seemed rather ordinary, became highly detailed, impeccably done, and of the highest quality. They often work from old black and white photographs of San Pedro and the Lake Atitlán area that Chema has assiduously collected. Without the signature of the artist, one cannot distinguish which of the two did the painting. In all probability, Chema signs some of the paintings done by his nephew, because with Chema’ s name and reputation, they can get a higher price for them, not an insignificant thing in the third world. Their watercolors portray the Maya in the context of a vast nature. Chema’s and Edwin’s depiction of the Maya world, done in a European style, offers an effective counterpoint to the purely Maya graphic style practiced by the other Tz’utuhil artists.