Both Miguel Angel Sunu Cortez and Bartolo Quiacain Cruz were promising artists studying under the tutelage of Pedro Rafael González Chavajay. Bartolo began studying with Pedro Rafael in around 1990, and Miguel started around ten years later. Both artists became sufficiently good to begin painting on their own and be included in exhibitions, but both gave up painting in favor of other occupations. Bartolo’s father owned one of the three bus companies in San Pedro that ran between San Pedro and Guatemala City or Quetzaltenango. Miguel started an internet café.

In January of 1993, sixteen paintings by Bartolo Quiacain were exhibited along with paintings by Pedro Rafael González Chavajay and Antonio C. Ixtamer at Café Camelina, part of La Pena, in Berkeley, California. A booklet accompanying the exhibition states:

“Although only nineteen years old, Bartolo Quiacain Cruz has been studying with Pedro Rafael for about two years now. When Pedro Rafael is not teaching school, the two can be seen together painting quietly in his studio. Bartolo’s paintings show the influence of his teacher. Bartolo clearly admired his subtle lighting and rich coloration. Because Pedro Rafael wanted him to concentrate on the actual process of painting, Bartolo has borrowed much subject matter and composition from his teacher.

“Bartolo’s competence quickly became recognized in San Pedro. His work is better than artists who have been painting for much longer. Some of his paintings indicate directions he might take when he begins to paint independently of his teacher. Bartolo gives his people a more delicate, sensitive look than the other artists—they seem more like individuals than types. Bartolo favors browns and rich earthy colors, and his best paintings are often more subdued. Bartolo has just begun his career as an artist. Judging from the quality of his work now, we can expect fascinating paintings as Bartolo finds his personal vision.”

Bartolo’s father who had paid for all his lessons with Pedro Rafael, was quite insistent that his son work as a bus driver. The hours were long, and although I encouraged him to keep on painting, and that I would buy those paintings, Bartolo did not have the energy to both drive and paint. His last painting was in 1994. 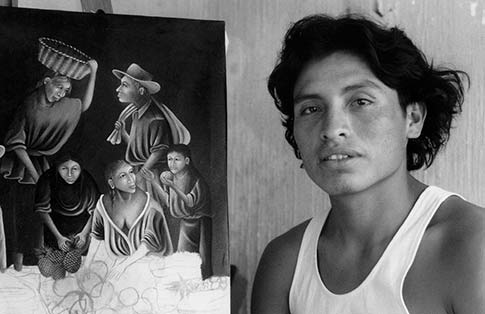 Bartolo Quiacain Cruz in front of  an unfinished painting. Within a year, Bartolo had given up his ambition of being an artist in favor of his father's desire that he become a bus driver.

Pedro Rafael paints more slowly and carefully than any of the other artists in San Pedro. His student Miguel Sunu painted much more slowly. The most outstanding characteristic of Miguel’s paintings is his depiction of the designs on the traje (traditional attire) of the people in his paintings. It is always very carefully and neatly done. Rather than painting more quickly as he gained experience, Miguel seem to paint more slowly. He also seemed unsure that his work was good enough, and even when he stopped taking lessons from Pedro Rafael, he would regularly bring his unfinished paintings to Rafael to hear his opinion. Eventually, running his internet café took over, and he never finished his last painting even thought I encouraged him. His last painting was in 2007. 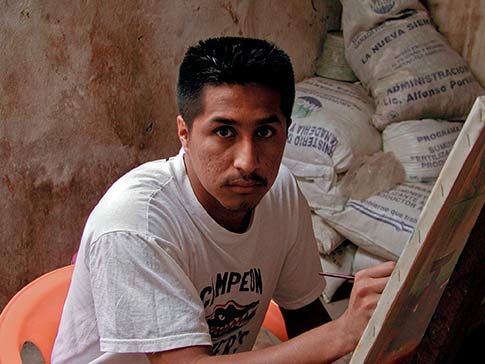 Miguel Angel Sunu Cortez works on a painting in his studio. This space would soon be converted into Miguel's internet cafe.

These two artists illustrate the problem of Maya artists. I think both Bartolo and Miguel thought they could earn a living as an artist. Neither of them compromised their art by painting quicker or painting subjects that would be the most saleable. The painters, not artists, of their generation that did find commercial success worked with the galleries in Santiago Atitlán. The galleries told them the themes and sizes of the paintings they wanted. As more young men took up painting, the prices paid by the galleries went down which adversely affected the quality of the paintings. Rather than become artisans, both Bartolo and Miguel gave up painting. The most successful artists, the ones who stayed true to their own individual vision, were artists whose primary source of income was not sale of their paintings, artists like Pedro Rafael González Chavajay, a school teacher, and Paula Nicho Cúmez, who had an art store. Neither of those artists completed more than ten to fifteen paintings per year. The painters who earned a good income from sales to galleries in Santiago catering to tourists would churn out one or two small paintings every day.