Antonio Coche Mendoza was the first oil painter in San Juan la Laguna. After he finished his basic studies, he asked his father to pay for him to study with San Pedro artist Mariano González Chavajay. Mariano had previously taught his own brother Matías and Emilio González Morales. Antonio apprenticed himself to Mariano for several months until his father decided that Antonio had learned enough. Armed with a few old paints and brushes that Mariano gave to him, Antonio set out on his own. At this point, Nicolas Reanda Quieju was one of the few Santiago Atitlán store owners who would buy paintings from artists, so Antonio began bringing him his paintings. Antonio soon established a good reputation for himself. As a successful artist, he began earning many times more than he could hope to earn as a campesino working on the land. 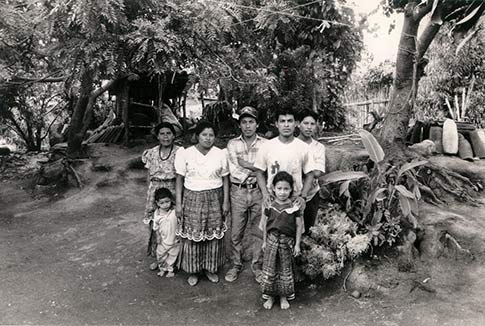 The Coché Mendoza family in in their back yard during the early 1990s. L. to R. back row: Sra. Mendoza mother, Anglina Quic, who became Antonio's wife, Antonio, Julian, who was just beginning to paint, Gregorio, who was not yet painting, and two younger siblings.

Antonio was still young and living at home when he decided to teach his younger brother Julian how to paint. Julian, a person of few words, quickly showed an natural ability and desire to paint. Julian had been painting for a couple of years when the family decided to pay for him to go to the Escuela Nacional de Artes Plasticas in Guatemala City. The income that both Antonio and Julian generated helped pay for Julian’s schooling. This was an unprecedented move among the self-taught Tz’utuhil artists. I worried about how it would change Julian’s painting, because I felt doubtful that his teachers would respect who he was as a Tz’utuhil Maya artist.

Diego Puzul, the younger brother of Vicenta Puzul, had opened a gallery in San Pedro where he sold paintings by his relatives and other local artists such as Antonio and Julian. There was one painting by Julian, Division en la Iglesia San Juan la Laguna, that he had painted before he went away to art school which was astounding in its theme, a conflict between John Vesey, the Catholic priest then presiding over both San Pedro and San Juan, and the traditional cofradias in San Juan. Vesey had caused trouble when he was the priest in Santiago Atitlán and it continued when he came over to San Pedro and San Juan. He was ultimately relieved of his duties. Julian’s painting show Vesey attacking other church members with a staff. Julian exhibited this painting in the fair of San Juan, the year it was completed, but it caused a great controversy and he had to remove it.

While Julian was studying in Guatemala City, I was able to keep track of the changes in his art, both by visiting him and by seeing the paintings, often class assignments, that he took Diego Puzul’s art. I shared my concerns about how schooling might destroy what was wonderful about Julian’s painting with Diego, because I felt that Julian was one of the more promising artists. My concerns proved not to be unfounded. After finishing three years of art school, Julian had learned many techniques but had lost his own way. He brought paintings done in three or four distinct styles to Diego’s gallery. The paintings were well done, but none of these styles was particularly outstanding or original. He still painted some paintings in the Tz’utuhil style of painting, but these had elements of European styles mixed in and, thus, had lost some of the distinctly Maya feel. 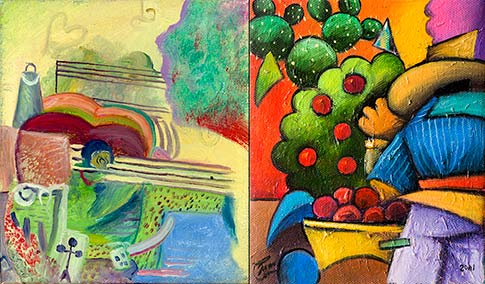 The painting on the left, Julian did in1995 as result of an assignment while he was in art school in Guatemala City. They had to go to a museum and copy paintings. This is a tiny painting 5" on the tall side. The painting on the right Julian painted in 2001. It is a transitional painting, showing a step in the evolution of his Maya cubist syle of painting.

Julian began assisting Mariano González Chavajay with his large paintings, because Mariano always had more requests than he was able to do himself. When his brother Antonio Coche won first place in the Biennial de Paiz, Guatemala’s most prestigious art competition, he and Antonio provided the galleries with versions of the painting in a variety of sizes, and replacing them as soon as they were sold. Whereas the other Tz’utuhil Maya artists had their own style and knew where they were going, Julian was floundering. He appeared more content to paint what other people requested of him, than to assert himself and discover his own path.

Julian had graduated from art school at least ten years before, when, in January of 2007,  I arrived in Guatemala.  I heard gossip from artists about the new basura (trash) Julian was painting. When I first saw the paintings, however, I totally disagreed. While it was true that his new paintings, done in a cubist style with Maya themes, had little connection to the Tz’utuhil Maya style typical of San Pedro and San Juan, the paintings were not only beautiful and original but also very carefully executed. I showed them to my friend Vicente Cumes, whom I always ask if I want to test my opinion, and he concurred. It seems as if finally Julian has found his own path, albeit a path very different from the other artists, and a path he would not have come upon without his art school training. The Mayan cubist paintings of Julian sold well. Soon all the painters who had no vision of their own were copying his style, and you could find Maya cubist paintings in all the galleries around the lake. Julian even painted large paintings for other artists such as Nicolas Reanda, which Nicolas signed and pawned off as his own. 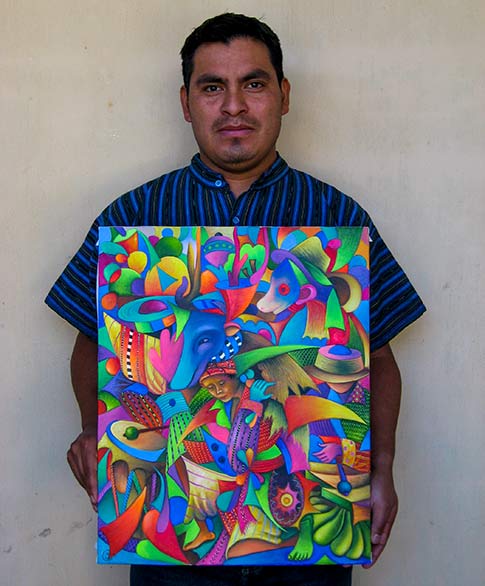 Julian with a Maya cubist painting of the deer dance. Julian now paints scenes of Maya traditons in this colorful style.

Julian was only the first of many of Antonio’s family members who Antonio taught to paint. Antonio was the oldest child in his family.  Antonio knew that the wives of brothers Mariano and Matías González Chavajay had become painters and were assisting their husbands, so he next taught his wife, Angelina Quic de Coche, how to paint. Angelina was the third Tz’utuhil Maya woman artist. Shortly thereafter, Antonio also taught her brother Pedro Remijo Quic Ixtamer. Pedro Remijo showed promise and painted a few exceptional works but then devoted himself to doing paintings he knew would sell. Around the same time, Pedro Remijo began helping local people set up computers. This proved to be a profitable enterprise, and like many new artists, he soon dropped painting in favor of more profitable work. Antonio then taught another brother, Gregorio. Gregorio knew from his older brothers’ experiences what the local galleries would buy, and rather than trying to forge a new path, he generally catered to what the galleries requested. Two younger brothers also learned to paint, bringing the total to five of Coche Mendonza brothers who were artists. It is typical of Central American countries that many members of one family will choose the same profession. Unlike their older brothers, who want to be known as artists, the three younger brothers seem content to earn their living painting what the galleries and tourists want. 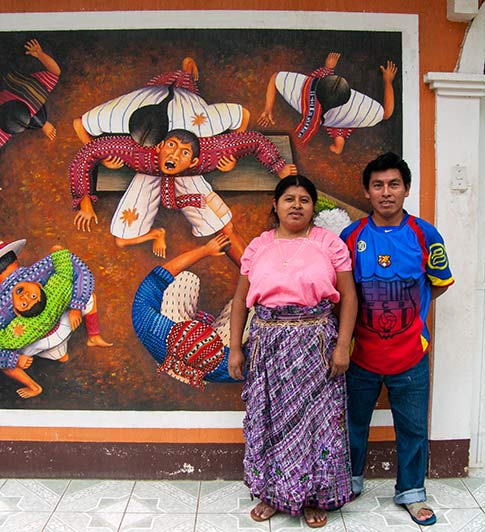 Agelina Quic and her husband Antonio Coche Mendoza in front of the mural outside of their gallery in San Juan la Laguna. The two of them have been seen on televsion and giving interviews claiming that Agelina was the creator of the "Vista-de -pajaro" syle of painting seen in the mural. Agelina was not yet even painting when Abrajam Batin copied the style from it's creator (Juan Fermin González Morales) and won the Glifo de Oro, top price in the prestigeous Paiz Biennial.